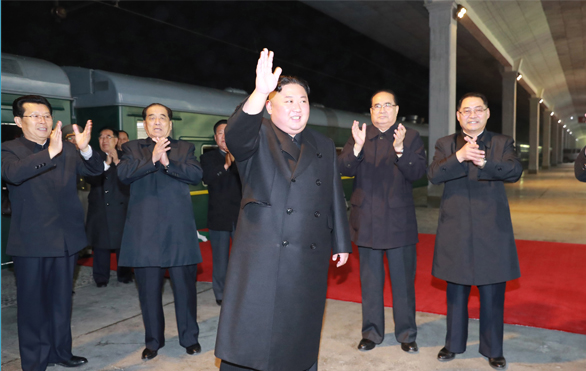 North Korean leader Kim Jong-un waves to the crowd before boarding his armored train to head to Vladivostok for his first summit with Russian President Vladimir Putin on Wednesday, in a photo provided by the North’s official KCNA. [YONHAP]

The Kremlin confirmed Tuesday that the first summit between Kim and Putin will take place on Thursday in Vladivostok, in Russia’s Far East. The two leaders were scheduled to hold a one-on-one meeting followed by extended talks.

A Kremlin spokesman said that Kim and Putin were expected to discuss a political and diplomatic solution toward the denuclearization of the Korean Peninsula.

The North’s official Korean Central News Agency (KCNA) reported that Kim departed “by a private train at dawn on Wednesday to visit the Russian Federation.”

He was accompanied by officials including Kim Phyong-hae and O Su-yong, members of the Political Bureau and vice chairmen of the Central Committee of the North’s ruling Workers' Party. The delegation also included North Korean Foreign Minister Ri Yong-ho, Ri Yong-gil, chief of the general staff of the North Korean People's Army, and Vice Foreign Minister Choe Son-hui.

Russian media reported later Wednesday morning that Kim had crossed the Russian border and had been spotted at the Khasan station. The Rajin-Khasan logistics project is symbolic of Pyongyang and Moscow’s economic cooperation.

The North-Russia summit comes nearly two months following Kim’s second summit with U.S. President Donald Trump in Hanoi, Vietnam, which ended with no deal. There has been amid an impasse in denuclearization negotiations since then.

Kim also traveled over 60 hours on his armored train for his summit with Trump in Vietnam. This is his first trip abroad since then.

The train ride to Vladivostok could take over 20 hours, and Kim was expected to arrive in Vladivostok later that day.

The Far Eastern Federal University on Russky Island is a likely summit venue.

This would mark the first summit between the leaders of North Korea and Russia in eight years.