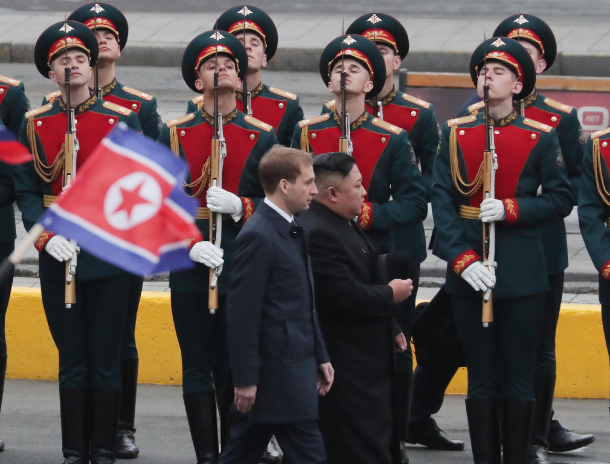 North Korean leader Kim Jong-un observes a Russian honor guard as he is welcomed at Vladivostok Station in Russia Wednesday ahead of his summit with Russian President Vladimir Putin. [YONHAP]

North Korean leader Kim Jong-un arrived in Vladivostok, Russia, on an armored train Wednesday for his first summit with Russian President Vladimir Putin today, in which the two leaders are expected to discuss denuclearization and economic cooperation.

Kim and his entourage arrived around 6 p.m. local time to a red carpet welcome at Vladivostok Station in Primorsky Krai, or Russia’s Far East. Russian officials and an honor guard awaited them.

From the station, Kim headed in a motorcade to the Far Eastern Federal University on Russky Island, the summit venue, where he arrived a half hour later. The campus hosted the 2012 Asia Pacific Economic Cooperation (APEC) summit and has a hotel for the North Korean delegation.

The North’s official Korean Central News Agency (KCNA) earlier reported that Kim departed “by a private train at dawn on Wednesday to visit the Russian Federation.”

Kim was seen off by senior officials and an honor guard at an unspecified station in North Korea, leading to speculation he may have departed from a location other than Pyongyang closer to the Russian border.

He was accompanied by officials including Kim Phyong-hae and O Su-yong, members of the Political Bureau and vice chairmen of the Central Committee of the North’s ruling Workers’ Party, KCNA reported.

Missing from the entourage was Kim Yong-chol, the vice chairman of the North’s ruling Workers’ Party’s Central Committee, who oversees inter-Korean affairs and has served as top nuclear negotiator with the United States.

Kim Yong-chol has accompanied the leader in all his summits with China, South Korea and the United States over the past year.

Nor was Kim’s wife Ri Sol-ju named in the delegation.

Kim Yo-jong, the North Korean leader’s younger sister and closest aide, was also not listed. There were reports she arrived in Vladivostok in advance, but they weren’t confirmed. She did not accompany her brother to a summit with Chinese President Xi Jinping in January.

Kim, in a black overcoat and hat, walked onto the platform around 10:30 a.m. for a welcome ceremony and told local officials that he is glad to “step on Russian soil.” He said that this was the “first step” and “would not be [his] last visit to Russia.”

Kim was presented with flowers, along with bread and salt, a Russian tradition to welcome guests symbolizing prosperity and health.

Khasan in Primorsky Krai’s Khasansky District, by the Tumen River, borders North Korea and China and is symbolic of North Korea and Russia’s economic cooperation as represented by the Rajin-Khasan logistics project.

Kim also visited the House of Russian-Korean Friendship, or the “House of Kim Il Sung,” a small wooden building dedicated to his grandfather built in 1986 at the border ahead of the North Korean founder’s visit to Russia and restored in 2016 after a fire burned it down. After the ceremony, the train departed for Ussuriysk, where it transferred onto the Trans-Siberian Railway to Vladivostok.

Traffic was restricted and police and military officers, as well as sniffer dogs, were spotted inspecting Vladivostok Station.

Kim’s protocol and security staff were on standby in the city ahead of their leader’s arrival, along with armored vehicles to transport the leader.

Likewise, the waters around Russky Island, off the southern coast of Vladivostok, will be closed to maritime traffic until tomorrow morning, according to maritime authorities.

The Kremlin confirmed Tuesday that the first summit between Kim and Putin will take place today in Vladivostok.

The two leaders were scheduled to hold a one-on-one meeting followed by extended talks. A reception is to be expected afterward.

Yuri Ushakov, a Kremlin aide, told reporters that a “political and diplomatic solution toward the denuclearization of the Korean Peninsula” was a key item on the agenda.

However, a joint agreement is not expected to be signed, according to the Kremlin. The Kremlin had remained tight-lipped about summit details in order to respect North Korea’s wishes, according to Ushakov.

This year marks the 70th anniversary of a North Korea-Russia economic and cultural cooperation agreement that enabled the development of bilateral trade and economic ties. It was signed on March 17, 1949.

Kim and Putin are expected to discuss denuclearization of the Korean Peninsula as Pyongyang’s negotiations with Washington have been at a standstill since the failed Hanoi summit on Feb. 28.

The Kim-Putin summit may put some pressure on Washington amid the impasse in negotiations. It could also be a means for Kim to balance its heavy reliance on China economically.

Kim is expected to seek ways to expand economic cooperation with Russia especially after failing to gain any sort of sanctions relief at the summit with Trump in Hanoi.

Kim may seek backing for sanctions relief as Russia is one of the five veto-wielding permanent members of the UN Security Council.

A key concern will be trying to extend the sojourn of thousands of North Korean laborers in Russia set to return home by the end of the year, in keeping with a ban on overseas workers under a December 2017 UN Security Council resolution.

Putin on Tuesday attended a naval ceremony in St. Petersburg unveiling a submarine capable of carrying six underwater nuclear drone ahead of its deployment at the end of next year. He was expected to arrive in Vladivostok this morning.

He will hold security talks with Chung Eui-yong, chief of the Blue House National Security Office, and Patrushev is expected to brief Seoul officials on the North-Russia summit.

This will be the first summit between the leaders of North Korea and Russia in eight years.