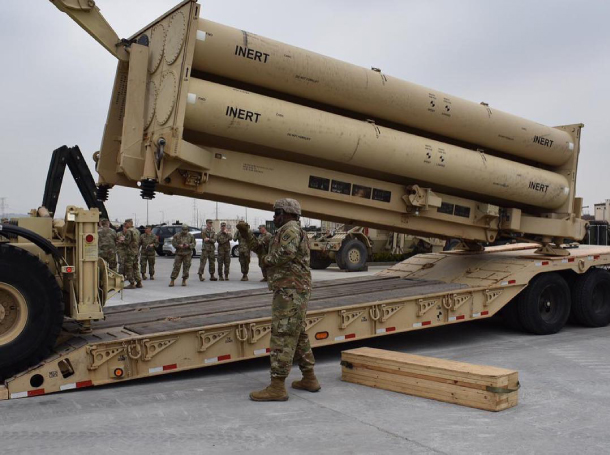 According to the USFK, troops conducted a weeklong exercise with the advanced antimissile system at Camp Humphreys in Pyeongtaek, Gyeonggi, from April 15 through 20.

The troops practiced with inactive missiles. A series of photos were posted on the 35th Air Defense Artillery Brigade’s Facebook page that showed the soldiers participating in the exercise. The post said the platoon conducted training with the 630th Clearance Company and the 11th Engineer Battalion.

“This exercise allowed D-2 Thaad to showcase crew proficiency and readiness,” it read.

This is the first time that the USFK publicized a Thaad exercise at the Pyeongtaek base.

At the end of last year, the USFK released photos of an earlier training session for loading the Thaad system. According to the U.S. military, several Thaad missiles were transported from Camp Carroll in Waegwan, North Gyeongsang, to the Delta Battery in Seongju. Soldiers were trained for three days from Sept. 18, 2018, to load and unload the missiles.

The training last September took place at a sensitive time. Moon visited Pyongyang for a third summit with North Korean leader Kim Jong-un, and the exercise period coincided with his trip.

The latest exercise in Pyeongtaek also took place at a tense time. North Korea test-fired what it called a “new-type tactical guided weapon” on April 17, and the country’s leader Kim supervised the event.

The USFK has conducted routine exercises for the operation of the Thaad system, but it is rare for the training to take place in Pyeongtaek rather than its home base in Seongju. The deployment of a Thaad battery, which includes a radar and six launchers, was completed in 2017 at the Seongju base.

There is speculation that conducting a Thaad exercise in Pyeongtaek, not Seongju, and making it public was a message to the North. Some have also said the training was inevitable because the South Korean capital region is outside the range of the antimissile system in Seongju.