Economy grows at slowest pace in more than 10 years

Economy grows at slowest pace in more than 10 years 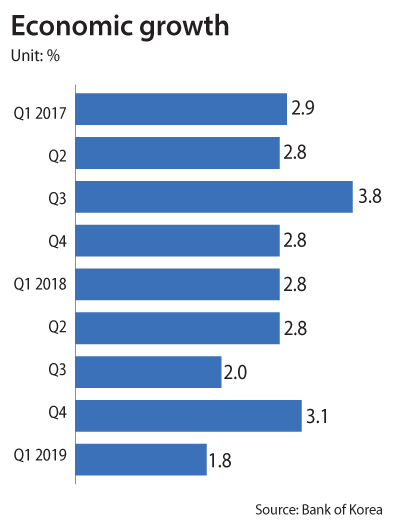 In the first quarter, Korea’s economy grew at the slowest pace in more than a decade.

According to the Bank of Korea on Thursday, the Korean economy in the first three months of 2019 expanded 1.8 percent, the slowest rate since the third quarter of 2009 ― in the depths of the global financial meltdown ― when growth was 0.9 percent.

In the last three month of 2017, the economy declined 0.2 percent on a quarterly basis, the BOK reported.

That was the sharpest decline since the fourth quarter of 2008, when the economy shrank 3.3 percent compared to the previous quarter.

The announcement came after the central bank last week lowered its growth projection for 2019 from 2.6 percent to 2.5 percent, following other institutions that have been cutting their growth forecasts, while the Finance Minister submitted a 6.7 trillion won stimulus budget to the National Assembly.

“I have called an emergency ministers meeting to evaluate the economic status and possible counter measures as the first quarter GDP results have fallen below our expectation,” Hong said.

He cited four reasons for the decelerating growth: the slowing growth of the global economy, which is affecting Korea’s exports, particularly semiconductors, which account for 21 percent of all Korean exports; growing external uncertainties including trade conflict between U.S. and China as well as Brexit; shrinking investments in the private sector that have resulted in the falling operating rates of factories; and relatively higher quarterly growth in the fourth quarter, the biggest increase since the first quarter of 2009.

The BOK report showed that private sector investment has declined sharply. In the first quarter, facilities investment plummeted 16.1 percent compared to the same period a year earlier. When compared to the previous quarter, investment fell 10.8 percent. Exports only inched up 0.2 percent year-on-year while on a quarterly basis they fell 2.6 percent. Imports fell 5.4 percent compared to the previous year and were down 3.3 percent on a quarterly basis. The decline in imports was directly related to corporate facilities investments, which involved lots of imported materials and machinery.

Output from the manufacturing industry went up 1.4 percent year-on-year, although on a quarterly basis it fell 2.4 percent.

Finance Minister Hong once again stressed the importance of speed in executing the supplementary budget, directing his remark to the National Assembly.

The government drew up a 6.7 trillion won supplementary budget on Wednesday, which is designed to target major issues – the weak economy, reinforcement of public safety, fine dust pollution and disaster relief.

“Through the supplementary budget, we will be able to back up economic policies including revitalizing investment and exports,” Hong said.

The finance minister added that the government will look into additional policies to bolster the economy.

“By June, we will announce an economic policy direction for the second half,” Hong said.