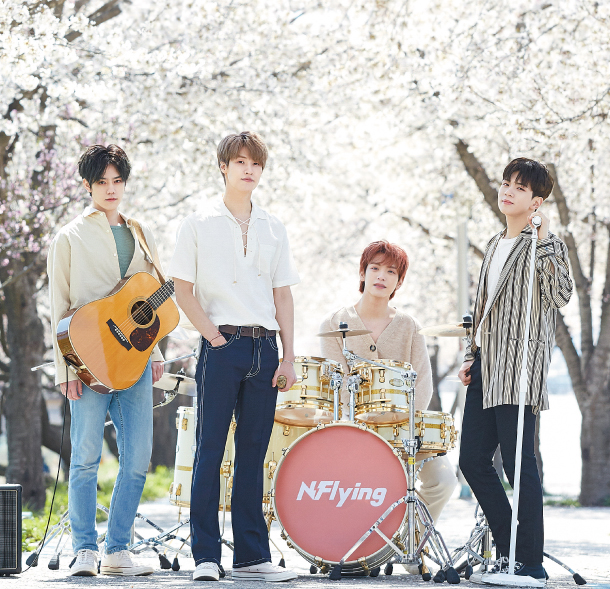 N.Flying made their debut in 2015, and saw their popularity rise this winter after the success of their song “Rooftop.” From left are members Cha Hun, Lee Seung-hyub, Kim Jae-hyun and Yoo Hwe-seung. [FNC ENTERTAINMENT]

It took four years for one of its songs to reach the top of the local music charts, but the four-member band N.Flying wouldn’t have it any other way.

Rock bands often struggle to compete with K-pop acts armed with large production teams, flashy choreography and professionally-made music videos, and N.Flying was no exception. They made their debut in May 2015, but hardly anyone recognized them in the streets until this winter, the members said in an interview held on Wednesday in Seongsu-dong, eastern Seoul, ahead of the release of their new EP “Fly High Project #3, Spring Memories” Wednesday evening.

“There’s this restaurant that we go to often,” said Kim Jae-hyun. “The owner has autographs from celebrities hanging on the wall. He had never asked us for our autographs, but he finally asked us for it this year.”

“Rooftop,” the lead track off their most recent EP, “Fly High Project #2,” is what launched the group to the top of the charts. The trendy rock song didn’t catch people’s attention when it first came out. In fact, it failed to appear on any local charts in the first few days after its release. Eventually, “Rooftop” made its way on to the charts in February and climbed up to the top on Feb. 25.

Since the song doesn’t stray much from their signature rock sound, the band attributes their success not to musical perfection or a unique sound, but their sincerity.

“I’ve always held on to the thought that if you make good music, one day the public will notice you,” said main vocalist Yoo Hwe-seung. “I told myself that if I’m an artist who makes good songs, then one day [my music] will reach people’s ears. We worked harder for the people who stuck by us and waited for us. I think that these things went and touched people’s hearts.”

Lee Seung-hyub, the leader of the group, agreed. “Good songs get heard by people. And I think that all our efforts and our sincerity reached them.”

Having figured out the meaning of a “hit song” for the first time in their four-year career, the members felt not only grateful but also responsible, which is the reason why the songs on their newest EP are all worth a listen. Rather than feeling pressured to continue their success, the members instead turned that energy into motivation, according to Kim.

“We put so much into ‘Spring Memories,’ that we’re 100 percent satisfied with every single track on it. Now, we’re excited to see what the fans and everyone else will think of it,” said Kim.

Lee, who has penned many of the band’s songs, including “Rooftop,” composed five songs on the six-track EP and wrote the lyrics for all of them. The title track, “Spring Memories,” has a much softer sound than what most fans are used to, but Lee’s sure that those who liked “Rooftop” will find it just as appealing.

“I didn’t particularly intend it, but it’s almost like a sequel to ‘Rooftop,’” said Lee. “I wrote ‘Rooftop’ to comfort listeners [when they’re feeling down]. In ‘Spring Memories,’ we talk about how both sweet and bitter things happen in spring. [The two songs] both talk about needing to comfort each other.”

“I felt my ordinary days suddenly turn special. I think the song has that power,” added Yoo.

The band will meet with their fans on Saturday for their first ever solo concert at the Hongdae Muvhall in western Seoul. It may be a small venue compared to the tens of thousands of seats filled with fans for big-time K-pop stars, but the fact that tickets were sold out was enough to delight the band.

“We held our first live performance in Japan [in 2015],” recollected Kim. “There was no crowd, just us and the other bands. The bands would take turns performing and watch each other. We started from there, and now we’re here. We would play the best we can even for just one person, so we would never think that Hongdae Muvhall is small. We’re just so grateful.”

Lee says the band is thankful for their humble beginnings. “Those times are what made us now. They made us work harder. Looking back, there is never a day that I feel ashamed of. We now feel like all the members are one. And that makes me feel so proud.”

“I used to want to be in a super-famous band like Coldplay and Maroon 5,” said Cha Hun. “But now when I think of myself five years from now, I hope that we are the same. We may not be at the same level as those world-famous bands, but we enjoy being together, which I hope continues on through the future.”

Kim agreed, “I hope we stay just the same, just the way we are - but on a bigger stage.”