Kia figures jump up after union deal frees up cash

Kia figures jump up after union deal frees up cash 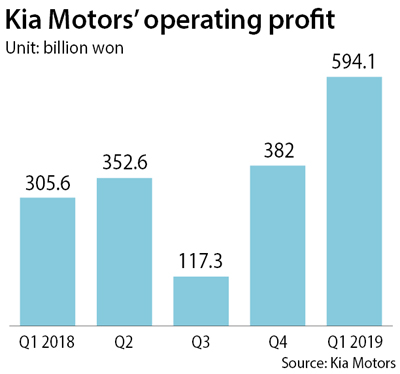 Kia Motors on Thursday reported a whopping 94.4 percent growth in operating profit on year in the first quarter, largely because it was able to recoup funds previously set aside for overdue wage payments.

While the company had set aside nearly 1 trillion won in the third quarter of 2017 after a Seoul court ordered it to pay overdue wages for employees, subsequent negotiations with the labor union allowed the company to spend less than initially forecast.

Roughly 280 billion won worth of reversed provisions were reflected in the company’s operating profit, according to Kim Nam-kyu, a vice president at Kia Motors.

Without the reversal, the company’s operating profit grew by only about 2.8 percent from 305.6 billion won posted in the first quarter last year.

“Considering the global auto market faced difficulties in the first quarter, we think that our figures don’t look too bad even without the provision reversal,” said Joo Woo-jeong, chief financial officer at Kia Motors, during a conference call with analysts Thursday. “Our strategy this year is to create momentum in the second half of the year - many new cars launches are planned in the latter half.”

In the local market, the carmaker is planning to launch a small sports utility vehicle currently developed under the project name SP2 in July. In September, a face-lifted version of the Mohave SUV will roll out. New versions of the K5 and K7 sedans will also hit the domestic market later in the year.

Overseas, the company is planning to launch a new K3 in China in May and a crossover version of the Ceed in Europe.

Joo said that Kia has launched a mid-to-long term plan to cut costs and increase profitability of new mobility businesses including car sharing and car hailing, adding that the company’s 2022 operating profit to sales ratio target is 5 percent. Last year, the ratio was 2.1 percent.

“I think it’s rather a conservative target and I am confident we can make it happen,” Joo said.