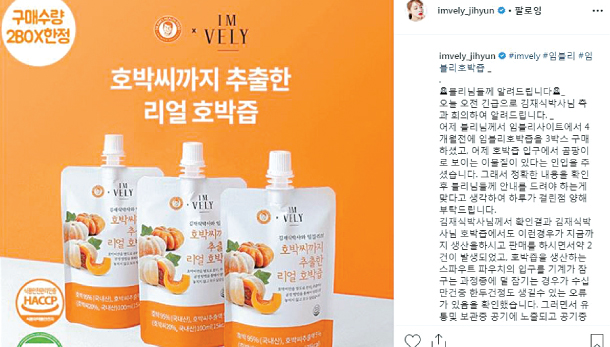 Pumpkin juice sold by Imvely was found to contain mold earlier this month. Im Ji-hyun, owner of Imvely, apologized on Instagram for the issue. [SCREEN CAPTURE]

As shopping through social media websites like Instagram has become more and more common in Korea over the last couple of years, so to have complaints about faulty products and low-quality items.

Many online shoppers find Instagram merchants and their products problematic. 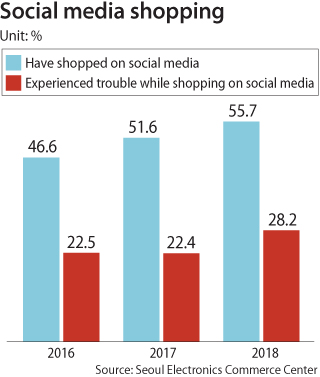 Merchants that advertise and sell their products through social media websites like Instagram are commonly referred to as sellers. One such seller, Imvely, is facing increasing pressure after reports emerged on April 3 that its pumpkin juice contains mold.

“I apologize for being a subject of public criticism and causing concern,” Im said in a statement. “We will provide full refunds for the product and do our best to offer safer products through stricter quality control.”

But Im’s moldy pumpkin juice was not the only problematic product purchased through social media.

According to a survey on customer experience when shopping through social media that the Seoul Metropolitan Government released earlier this month, 28.2 percent of people said they experienced trouble when purchasing products on social media.

In many cases, sellers could not be reached or refused to provide refunds or replacements, the survey said.

Im has been a role model for wannabe sellers in Korea, as she became one of the most successful social media influencers in the country.

Once a fitting model for her husband’s shopping mall, Im is now a reputable social media star with 827,000 followers on her Instagram account as of Wednesday.

Thanks to her huge online following, her online shopping mall, founded in 2013, became a major fashion and beauty brand that makes around 170 billion won ($146.7 million) in annual sales.

Sellers like Im start their Instagram lives as normal social media users. Many influential Instagram sellers say that they started actively selling products on social media after being bombarded with comments asking for information on the products seen in their posts.

Sharing their private lives is a key marketing strategy for sellers. Influential Instagram merchants share almost everything happening in their lives. Im, for example, has shared all her major life events like marriage, pregnancy and childbirth publicly on her Instagram page. 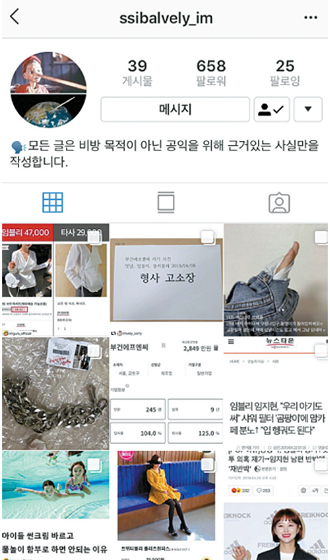 Whether the shared stories are true or not, consumers start to feel a connection with those sellers, giving them huge followings of extremely dedicated fans.

Even if advertised products are cheaper when bought from other merchants, followers will often choose to stick with their favorite influencer and passionately argue with those who find problems with the products.

Some people criticize those diehard fans, even labeling them as “handmaids” for the sellers.

All a social media merchant needs is a small piece of the mobile shopping transaction pie that amounts to more than 10 trillion won a year.

But gaining that many followers and that much influence is easier said than done as so many people have already gained a foothold in the social media market. Websites like Instagram are flooded with fake luxury goods and unverified health products as businesses attempt to sell whatever they can to make a profit.

While social media users like and follow Instagram sellers for a range of different reasons, they tend to fall out of love with them for one single reason: false advertisements.

One seller named Cheeu is facing pressure after the clothes she advertised as self-made turned out to be copies of products from famous luxury brands and local designers.

Cheeu, who has more than 160,000 followers on her Instagram account, rose to social media fame with her sense of humor and her popular luxury goods unboxing events.

The Instagram star is also accused of being close to Hwang Ha-na, the granddaughter of the founder of Namyang Dairy Products.

Hwang, who was arrested earlier this month on charges of buying methamphetamine and using the illegal substance in 2015, was also a clothes and beauty product seller on Instagram with some 200,000 followers.

Hong Dam-ki, who goes by Madmoiselle on Instagram, was recently accused of using false information to advertise her products. Hong, with more than 900,000 followers on her Instagram account, claimed that hydrogen water has an antioxidant effect and can slow the aging process.

Yeo Seon-ju, the owner of the Lillang de Beaute Instagram account with 119,000 followers, faced public backlash after her products faced a series of complaints.

In many cases, Instagram sellers post apologetic statements or videos on their accounts when controversies arise. They still maintain their businesses on social media after filing complaints and disabling people from posting comments on their posts.

Many consumers critical of these sellers often gather online to discuss the issues they’ve faced with Instagram merchants.

Some of them create websites or write reviews to prevent others from being fooled.

“I was a big fan of Im since she was a clothing model and I was even one of the registered members of Imvely when it first launched,” said a 30-year-old office worker who operates an anti-Imvely account on Instagram.

The anti-fan, who wishes to remain anonymous, said she was disappointed with Imvely when Im started raising the prices for her products and mishandling complaints.

“I was especially furious when I heard that [Im] was mistreating her employees,” she added.

Some also find that Instagram sellers are not consistent with what they sell.

“Some Instagram merchants selling clothes all of a sudden started selling pollock roe,” said the 30-year-old operator of an anti-Cheeu Instagram account. “They just do whatever to make money.”

Experts think that such consumers experience emotional changes because they grow attached to sellers and their products. The anti-fans agree they felt as if they were personally betrayed by the sellers when they started misusing their social influence.

“Instagram sellers advertise products by putting out their own faces,” said Lee Byung-kwan, a psychology professor at Kwangwoon University. “Consumers can be especially furious as they could link issues in the sellers’ product with the merchants’ moral values.”

Some experts advise consumers to be more critical in evaluating Instagram sellers’ products. No matter how intimate sellers may be on social media, they are still business owners looking to turn a profit.

“Consumers need to learn and critically view advertisements so that we can establish a smart consumption pattern,” said Cho Chang-hoan, a communications professor at Yonsei University.