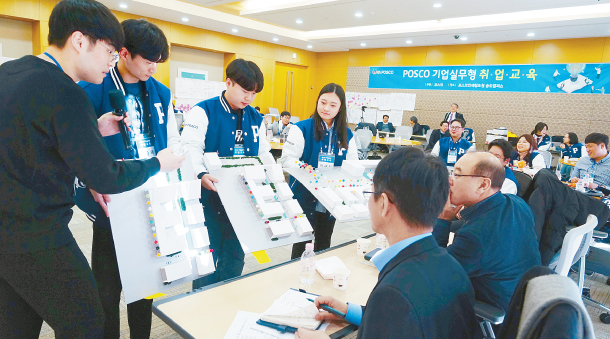 Posco has run educational career programs for young job seekers to enhance their competencies in areas such as problem-solving and creativity. [POSCO]

Since its foundation, Korea’s largest steelmaker has worked hard to benefit the public interest. It has created educational and cultural infrastructure in Pohang, North Gyeongsang, and Gwangyang, South Jeolla, and trained future generations through its Steel Scholarship Foundation and the Pohang University of Science and Technology.

The company has promoted sustainable growth in local communities through the Posco TJ Park Foundation, Posco Volunteer Group and the Posco 1% Sharing Foundation.

As a corporate citizen, Posco has carried out several programs to help its partners and small and medium-sized enterprises prosper. Posco ensures early cash payments and operates fair bidding systems to prevent late and non-payment risks for SMEs. It has continued to expand the lowest bidding system to ensure fair delivery price and provide practical assistance to its partners.

Posco has provided 20 billion won ($17 million) worth of financial support to SMEs over the last five years to help them achieve innovative growth.

For the first time since 2004, Posco has operated a performance-sharing system to supply upgraded materials and facilities to partnered firms to help them develop their own technologies and skills. Posco has shared 50 percent of the income it generates from the program with the SMEs.

In addition, Posco has run various programs that provide practical assistance to jobseekers and start-ups. For the past five years, the company has held a three-week course titled “Business Practical Training for Employees” to help young jobseekers improve their practical job skills.

Posco is planning to operate a “Business Incubating School” over the next five years to support successful start-ups and a “Youth AI and Big Data Academy” to nurture experts for the fourth industrial revolution.

Last year, Posco started the training program with a class of 25 young job seekers hoping to work in its partnered firms. By the end of the year, a total of 121 people had completed the program and 114 of them had gone on to find jobs, making a positive impact on the industry.

Meanwhile, Posco has already promised to donate 1 billion won to the Community Chest of Korea for the recovery efforts in Gangwon, where residents suffered severe losses from a wildfire earlier this month. Of that fund, 200 million won is designated as housing assistance in severely damaged areas.

“As a corporate citizen, Posco should take a lead in recovering the forest and the lives of the victims,” said Posco CEO Choi Jeong-woo. “I hope that our aid can be a little comfort and help to residents who have suffered a great loss due to the sudden forest fires.”