Kim Yong-chol out at UFD, unknown in

Kim Yong-chol out at UFD, unknown in 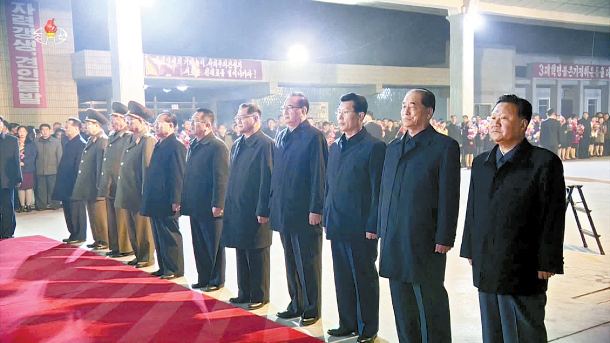 Top North Korean officials, including Choe Ryong-hae, far right, president of the Presidium of the North’s legislature, or Pak Pong-ju, second to right, vice chairman of the ruling Workers’ Party, line up to see Kim Jong-un off as he departed for Russia on Wednesday morning at an unidentified station. Noted was the absence of Kim Yong-chol, who the South’s spy agency on Wednesday said had been removed as head of the United Front Department. [YONHAP]

North Korea replaced Kim Yong-chol as head of its leading department in charge of inter-Korean relations and espionage, according to the South’s spy agency on Wednesday.

His replacement as director of the United Front Department (UFD), Jang Kum-chol, is a little-known figure in the South. He is believed to have played a behind-the-scenes role in coordinating inter-Korean exchanges, a South Korean lawmaker on the National Assembly’s Intelligence Committee said, based on a briefing by the National Intelligence Service (NIS).

An official at the South’s Unification Ministry on Thursday said there were almost no prior records on Jang in its records of North Korean officials, and that it was impossible to comment on the new figure until he appears in an official setting.

Kim’s removal as UFD director may be punishment for the failure of North Korean leader Kim Jong-un’s February summit with U.S. President Donald Trump in Hanoi, Vietnam, a meeting that Kim Yong-chol had helped engineer by flying to Washington in January.

According to one diplomatic source, after the summit’s collapse, Kim Jong-un ordered a crackdown on several officials responsible for engaging with the South and the United States, which included Kim Yong-chol.

Yet according to the NIS, Kim Yong-chol is not believed to have been purged from the North’s leadership entirely, as he continues to retain his other titles as vice chairman of the Central Committee of the North’s ruling Workers’ Party and member of the State Affairs Commission, the top decision-making body in the country.

Kim Yong-chol’s absence from Kim Jong-un’s entourage to the summit with Russian President Vladimir Putin this week has been noted as a sign that he has been sidelined from the North’s foreign policy ventures, as the country veers away from dialogue with the United States and South Korea and inches closer to its traditional allies, China and Russia.

Under his successor, Jang Kum-chol, the North is expected to assume a more forceful posture toward the South that departs from the relative composure it has shown since last year’s detente.

On Thursday, the North’s Committee for the Peaceful Reunification of the Country (CPRC), a branch under the UFD, issued the country’s first official criticism of the South by saying Seoul was committing “acts of perfidy” by staging joint military drills with the United States.

The criticism, issued in a statement by a CPRC spokesman, said the exercises were “an outright challenge to the historic April 27 Panmunjom Declaration and the September Pyongyang Joint Declaration reflecting the unanimous will of the entire nation for the peace and prosperity of the Korean Peninsula.”

Published just days before the first anniversary of the inter-Korean summit on Saturday, the statement testifies to Pyongyang’s recent discontent over the lack of progress in its negotiations with the United States and Seoul’s inability to engage the North independently of Washington’s maximum pressure campaign.

U.S. Secretary of State Mike Pompeo on Wednesday also testified to these ongoing difficulties in the negotiations, saying the process remained “bumpy” and “challenging” but that he hoped there would be “more chances to have serious conversations” to move forward.

Pompeo also dismissed the North’s recent call last week to have him replaced with a more “mature” negotiator, saying the demands had only been made from a “mid-level guy” in Pyongyang’s Foreign Ministry.

Yet by removing Kim from its negotiation channels with the United States and South Korea, the North may be again signaling to Washington it wants to begin talks anew with fresh personnel manning the discussions.

Given Jang’s virtually unknown background, other than his reported roles at the North’s National Reconciliation Council and Korea-Asia-Pacific Peace Committee, analysts say he may be unable to wield the same influence that Kim was able to command as a veteran intelligence chief.