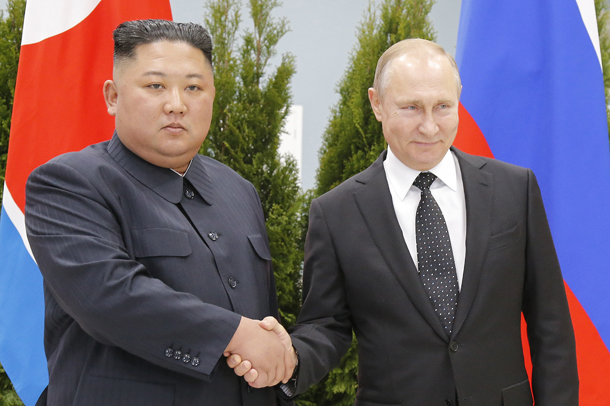 North Korean leader Kim Jong-un and Russian President Vladimir Putin kicked off their first summit with a handshake in Vladivostok on Thursday, before discussions expected to concentrate on denuclearization and security in Northeast Asia.

The summit, the first between the leaders of North Korea and Russia in eight years, kicked off around 2 p.m. local time at the Far Eastern Federal University on Russky Island amid heightened security.

Putin stood outside the summit venue to welcome Kim, who arrived in his black armored limousine. The North Korean leader thanked him, before they entered the summit building together.

The two leaders shook hands with Russian officials before heading into talks.

Putin said he supports the efforts toward normalizing relations with North-U.S. relations and that he backs inter-Korean relations.

He added that he expects this summit to contribute toward “producing a solution to the Korean Peninsula.”

Likewise, Kim thanked Putin for the meeting amid a busy schedule and recalled the two countries’ traditional ties while saying he looks forward developing their future relations.

Kim noted that the “entire world is focused on the Korean Peninsula, and l believe we can have very meaningful dialogue and evaluate and share our views on this together.”

Kim arrived in Russia’s Far East on his armored train the previous day, while Putin arrived in Vladivostok by helicopter earlier Thursday from Chita, where he attended a meeting on tackling wildfires.

The two leaders were scheduled to hold an hour-long one-on-one meeting, followed by expanded talks and a reception.

Along with the nuclear issue, they are expected to discuss bilateral relations including political, economic, cultural and humanitarian ties.

Russian media reported that the summit was expected to run for four hours.

However, the two sides were not expected to sign a joint statement, according to the Kremlin.

The first summit between Kim and Putin will be long on symbolism and short on concrete achievements, analysts predicted.

It could put some pressure on the United States amid an impasse in denuclearization negotiations after a summit between Kim Jong-un and U.S. President Donald Trump in Hanoi, Vietnam, failed to produce a nuclear deal on Feb. 28.

The Kremlin said that the key issue at the summit is a diplomatic solution for the denuclearization of the Korean Peninsula.

Kim will likely seek for Russia’s support for sanctions relief and expanding economic cooperation after failing to ease the U.S.-led international economic pressure campaign at the Hanoi summit. Russia and China are two of the five permanent members of the UN Security Council that have traditionally come to North Korea’s defense and have favored a phased, step-by-step approach toward denuclearization on the Korean Peninsula.

Moscow also supports the six-party talks structure to deal with North Korea, involving the two Koreas, China, Japan, Russia and the United States. The six-party talks on North Korea denuclearization have been defunct since late 2008 when Pyongyang walked away from them.

In a rare interview with Russian news channel Rossiya-24 Wednesday, Kim said he hopes in his summit with Putin “to discuss various issues, including managing and maintaining the situation on the Korean Peninsula in a stable manner jointly,” and that the meeting would “be an opportunity for fruitful dialogue.”

The North’s official Korean Central News Agency (KCNA) on Thursday reported Kim’s arrival in Vladivostok around 6 p.m. on Wednesday, in keeping with its recent practice of promptly reporting on the leader’s travels abroad.

The KCNA reported that Kim was greeted by a welcome ceremony at the station by the Russian Minister for the Development of the Far East and Arctic Alexander Kozlov, Vice Foreign Minister Igor Morgulov, Governor of Primorsky Krai Oleg Kozhemyako and Russian Ambassador to North Korea Alexander Matsegora.

It also reported Kim’s stop at the Khasan station, bordering North Korea, adding that Russian senior officials “warmly welcomed” the leader to Russia and said that “President Putin dispatched them to the border railway station with particular attention given to his current visit.”