Reps back to brawling to block fast-track bills

Reps back to brawling to block fast-track bills 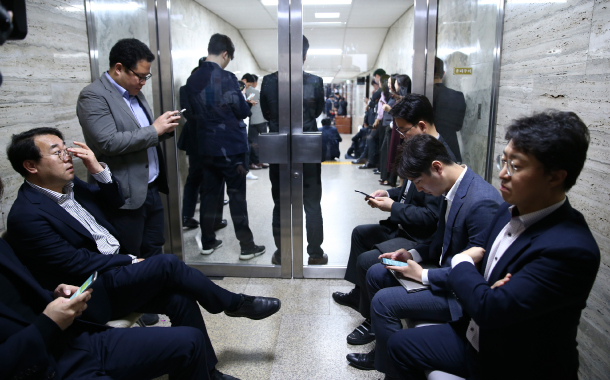 Dozens of opposition Liberty Korea Party (LKP) lawmakers and their aides stage a sit-in Thursday in front of a conference room in which a special parliamentary committee was set to review a bill on a new investigative agency focusing on top officials. [LIM HYUN-DONG]

Partisan conflict led to a physical standoff at the National Assembly on Thursday as lawmakers from the main opposition Liberty Korea Party (LKP) tried to obstruct a parliamentary committee from fast-tracking a contentious bill on the creation of an independent investigative agency.

Since Thursday morning several dozen LKP lawmakers and their aides staged a forced sit-in at a conference room where a special parliamentary committee on judicial reform was set to convene in the afternoon to fast-track the bill on the new agency, which is designed to crack down on crimes committed by high ranking officials.

That bill was packaged together with another on reforms to the electoral system as part of a compromise between four political parties - the ruling Democratic Party (DP), the Bareunmirae Party (BP), Justice Party and Party for Democracy and Peace - on Monday, when the parties also agreed to set the bills on a legislative fast track to ensure they reach the floor without obstruction from the LKP and other opposing lawmakers.

But the deal met with heavy resistance within the BP, particularly among lawmakers from the party’s more conservative wing, who openly defied their leaders’ decision to compromise with the ruling party.

One of those lawmakers, Rep. Oh Shin-hwan, had a seat on the judicial reform committee and was regarded as a decisive vote to fast-track the bill on Thursday. When he announced Wednesday morning he would use his vote to strike down the agency bill, BP floor leader Kim Kwan-young replaced him with a more compliant lawmaker, Rep. Chae Yi-bai - an action that prompted an outcry from dissenting party members and the LKP, which hoped that Oh would kill the bill.

Speaker Moon Hee-sang officially approved the replacement Thursday from a nearby hospital, where he was transported a day earlier after suffering shock from hypoglycemia as a result of over 50 LKP lawmakers storming his office and demanding that he keep Oh on the committee.

To stop Chae from attending the committee meeting on Thursday, LKP lawmakers physically blocked him from leaving his office at the National Assembly.

A beleaguered Chae told reporters through an open window in his office that he had called the police and that the LKP’s attempts to physically obstruct legislative procedures were a violation of the law.

This was a reference to an amendment to the parliamentary law passed in 2012 that outlaws the physical violence that was routine in the Korean legislature for decades.

It also created those same guidelines on the fast-track process to ensure no single majority pushes through legislation unilaterally through the powers vested in the office of the speaker, though these same roadblocks are partly responsible for this week’s legislative chaos.

Chae eventually made it out of his office with police help and entered the meeting room - still occupied by LKP lawmakers - but last minute negotiations on the agency bill between the DP and the BP prevented the committee from convening on schedule.

A separate meeting of lawmakers on a special parliamentary committee for political reform, tasked to review and fast-track the electoral reform bill, was also delayed on Thursday due to resistance from LKP lawmakers.

After hours of negotiations, the parties finally emerged with an agreed-upon draft of the two bills and filed them to be reviewed by the committees. In this process, the BP replaced a second lawmaker sitting on the judicial reform committee, Rep. Kwon Eun-hee, with Rep. Lim Jae-hun because the former could not agree with the ultimate compromise.

While the committees had not yet begun their review as of press time, lawmakers were expected to vote for the fast-track process almost immediately after the meetings kicked off, though a physical confrontation with LKP lawmakers staging the sit-in began late Thursday evening.