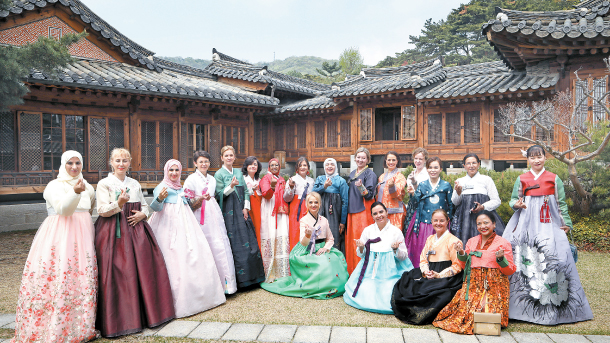 Spouses of ambassadors soaked in the spring view of the mountains from a hanok (traditional Korean house) at the Korea Furniture Museum in central Seoul, which was once used by a queen of the Joseon Dynasty (1392-1910).

“For Koreans, our garden was not located within the walls of the house and its yard,” said Park Jung-sun, director of Korea Furniture Museum in Seongbuk District, addressing around 20 spouses of ambassadors on Wednesday. “Our garden is as far as the eye can see.”

The Ambassadors Spouses Association in Seoul (ASAS) held a Korean cultural immersion event for members of the association on Wednesday, which involved trying on hanbok, traditional Korean dress, and touring the Korea Furniture Museum to learn about the distinct characteristics of traditional Korean homes and furniture.

“Where you are sitting currently is the women’s quarters of a hanok,” Park said. “When she looks out the window, she sees the mountains at a distance and the nature. But as you can see, when she looks out the window to the left side, she has a clear view of the front yard of the house. So, in one place, she sees her dreams out one window, and her reality out of another one.”

Empress Sunjeong (1894-1966), the last queen of Korea and wife of Emperor Sunjong (1874-1926), once sat in the same room of the hanok that the spouses of ambassadors sat. The hanok was once located slightly farther north than where it is today at the furniture museum. The museum bought the hanok in the 1990s, dissembled it and reassembled it on the museum grounds by 2003.

The one-hour museum tour also allowed the spouses to view and learn about some of the 2,000 pieces of furniture housed.

“Key words to understanding Korean traditional furniture is aesthetics, simplicity and practicality,” Park said. “These wooden boxes, placed on top of each other to make one bookshelf, are made with Paulownia coreana, which explains its light weight, and are made just wide enough so that one can carry each box under one arm. Each box has a cover that does not fall out even when it is held at a tilt because it is designed to open with an upward push at the handle on the cover.”

Most of the furniture was collected by the museum, which is privately run, whenever a hanok of substantial standing and history was sold throughout Korea during the rapid development of the 1960s and ’70s, according to the museum.

As the spouses of ambassadors toured the museum, they drew parallels and differences between architecture found in their homelands.

“In Thailand, we also have traditional houses made out of wood, but they are elevated high above the ground to make way for the wind and to keep the houses safe from floods,” said Porndee Lapisatepun, wife of the ambassador of Thailand to Korea. “It’s fascinating to see the different materials used for houses across countries.”

“Just sitting inside a hanok structure and smelling the wood, one gets the similar feeling of sitting inside a house in Austria or Norway,” said Herta Solberg, wife of the ambassador of Norway. “It was great to find out that Koreans built their homes in a way that is not disruptive to nature but only to borrow from it, because architects in Europe are trying to achieve that as well.”

“We generally participate in the global costumes festival organized by the Korean Cultural Association in the autumn, as it presents us an opportunity to experience wearing hanbok,” said Flavia-Athena Kloos, wife of the ambassador of Romania to Korea and president of ASAS. “But then we thought, why not do it earlier in the year - so here we are, enjoying the spring in our hanbok and learning about Korean traditions and values.”