A Korean baseball player was suspended for at least one year by his club for covering up a drunk driving accident. 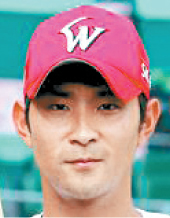 The SK Wyverns of the Korea Baseball Organization (KBO) said they have decided to place infielder Kang Seung-ho on the voluntarily retired list. The team will file formal papers at the league office Friday, and players on that list are ineligible to play anywhere in the KBO without their club’s permission. Teams can’t reinstate such players until at least one year has passed.

The Wyverns’ decision came hours after the KBO handed down a 90-game suspension on Kang, while also fining him 10 million won ($8,600) and ordering him to do 180 hours of community service.

Kang was questioned by police after crashing into a guard rail on a highway in Gwangmyeong, Gyeonggi, around 2:30 a.m. Monday.

Police said his blood alcohol level was 0.089 percent, well over the legal limit of 0.03 percent and high enough to warrant the revocation of his driver’s license.

Kang, who had been demoted to the second-tier Futures League the previous week while mired in a hitting slump, didn’t report the accident to his minor league coaching staff, and traveled to Gyeongsan, North Gyeongsang, for a Futures League game on Tuesday.

The Wyverns only found out about Kang’s accident when a television news reporter contacted the team for a story on the case. The report ran Wednesday night, and the Wyverns said Kang acknowledged his wrongdoing only hours before the report aired.

Kang was batting .154 in 15 games when he was sent down to the Futures League. KBO teams play 144 games a season.

Kang was supposed to earn 96 million won in annual salary this year but he won’t be paid while on the voluntarily retired list. The Wyverns said they will donate the remainder of Kang’s salary for this season to help families of victims of auto accidents.