Who will win the MLB’s Korean clash?

Who will win the MLB’s Korean clash? 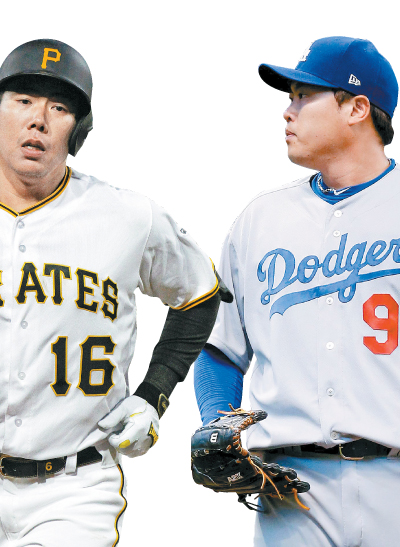 The Pittsburgh Pirates headed to Dodger Stadium on Friday for a weekend series against the Los Angeles Dodgers. Although it’s just a regular game in the major league, it’s a big one in Korea as there’s a chance that two Korean major leaguers - Ryu Hyun-jin and Kang Jung-ho - will face each other.

The first round of the three game series will kick off at 11:10 a.m. today, Korea time.

Although the two players have been playing in the majors for quite a while now, this will be the first time that they have faced each other.

Ryu was the first player ever to head straight to the majors from the KBO, in 2013, while Kang was the second player to do so, in 2015.

When Kang first joined the majors in 2015, Ryu was out with an injury. That continued into 2016, and by the time Ryu was back on the mound, Kang was off the roster due to a drunk driving incident.

This may be their first major league meet-up, but the two have faced each other in the KBO. Looking at their KBO record, Ryu comes out on top.

Against Ryu, Kang only had a .167 batting average. But in the two’s last game together, on Oct. 4, 2012, Kang hit a home run and a two-base hit for a 1-1 draw between the Nexen Heroes, now the Kiwoom Heroes and Kang’s team at the time, and the Hanwha Eagles where Ryu played.

That was Ryu’s last game in Korea, but as it ended in a draw, he failed to pick up his 10th win of the season.

This season, Ryu is off to another great start as he has already picked up two wins and a loss with a 3.10 ERA.

Ryu first started in the opening game against the Arizona Diamondbacks at Dodger Stadium and picked up a win, becoming the first Korean pitcher since Park Chan-ho in 2001 to pick up a win in an opening game in the major league.

Throughout six innings, Ryu gave up four hits and a run while striking out eight. Although the Dodgers’ bullpen gave up four more runs after Ryu left the mound, they still cruised to a big 12-7 victory to start the 2019 season.

Then, on April 2, he started in his second game against the San Francisco Giants. Ryu gave up two runs in seven innings for another quality start and picked up his second win of the season. Interestingly, Ryu’s two runs were a home run from pitcher Madison Bumgarner. This was the first time since he joined the majors in 2013 that Ryu has given up a home run to a pitcher.

However, Ryu had to take a short break in the season during the third game, against the St. Louis Cardinals on April 8. Ryu had to leave the mound after tossing only one and two-thirds of an inning due to a left groin injury, which he also suffered from last year. Following the game, Ryu was placed on the 10-day injured list.

But most recently on Saturday last week, Ryu returned to the mound for the first time in 12 days, picking up his first loss of the season against the Milwaukee Brewers. Throughout five and two-thirds of an inning, Ryu gave up six hits and two runs. Of the six hits, two were home runs by Christian Yelich.

But although he picked up a loss, it wasn’t a total failure as he gave up only one walk while striking out nine in 92 pitches.

Ryu will be looking for his third win of the season and, considering his career record against the Pirates, it is likely that he’ll pull it off. Ryu has started in four games against the Pirates and picked up four wins with a 2.49 ERA.

While Ryu got off to a solid start this season, Kang was a bit slower off the mark. Despite missing almost two full seasons, Kang set high expectations by topping the major league’s home run ranking during spring training, at seven.

Then, once the season started, Kang hit his first home run in his fourth game. But following that home run, Kang’s bat stayed silent. Kang struggled to continue his performance until his second home run on April 16, against the Detroit Tigers.

Although Kang has now hit two more, most recently on Wednesday against the Arizona Diamondbacks, he has been inconsistent at bat. So far, Kang’s performance has been either a home run or nothing.

Kang has come face-to-face with another former KBO player this week.

On Wednesday, when Kang hit his fourth home run of the season, he hit a sinker off of Merrill Kelly of the Diamondbacks, who played for the SK Wyverns until last year.

Kelly joined the KBO in 2015 and played four seasons with the Wyverns and, after leading the team to the Korean Series title last season, he returned to the United States and now plays for the Diamondbacks.

However, the two players never faced each other in Korea as Kang left to the majors when Kelly joined the KBO.

Following that home run, Kang added another hit against the Diamondbacks on Thursday, putting his batting average at .172.

Aside from the performances of the Korean players this season, the two clubs are also heading into their weekend series in different positions. The Dodgers return home as the leader in the National League West, standing at 16 wins and 11 losses this season. Looking at the Dodgers’ record in the last 10 games, they have won seven while losing three.

The Pirates are in need of a win. Although they ranked second in the National League Central, at 12 wins and 11 losses, they are currently in a five-game losing streak.

Against Ryu, the Pirates will have right-handed pitcher Chris Archer as starter. Archer started in one game against the Dodgers in 2016, where he gave up three runs throughout seven innings, but ended up picking up a loss.

This season, Archer started in four games and has picked up a win and a loss with a 2.74 ERA.