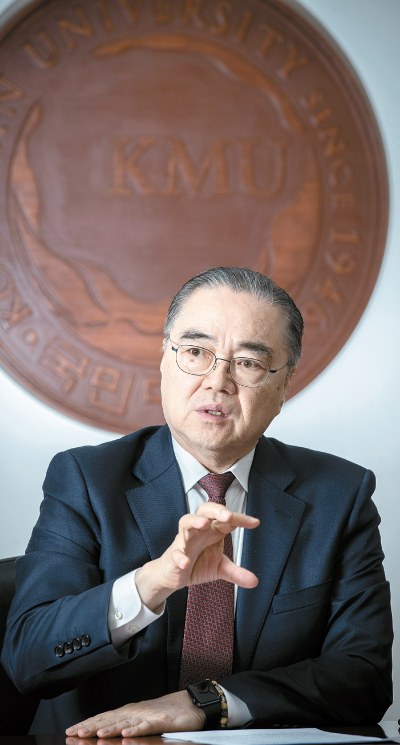 Yu Ji-su, the president of Kookmin University, says the key factor in higher education is not theory, but hands-on experience using data. He says that Korea must lift restrictions like China to help the country’s educational system. [JEON MIN-KYU]

Yu Ji-su, the president of Kookmin University, has made the school a symbol of the fourth industrial revolution thanks to his innovative curriculum.

The school’s main campus in Seongbuk District, central Seoul, is becoming a benchmark for other schools, as it breaks boundaries between disciplines and offers combined lectures between the 13 colleges within the university.

Kookmin University was founded in 1946 to promote nationalism and public welfare by the leaders of the provisional government of Korea. Kim Gu, an independence movement leader, became the initial representative of the school’s preparatory association and Shin Ik-hee, who also fought for Korea’s independence, became its first chairman.

The school’s educational philosophy is based on nurturing community spirit and pragmatism. It is also known for prioritizing the team over the individual and utility over theory.

The university is one of the leading schools in automotive engineering. It came in fourth place in the Formula-SAE competition, which challenges students to conceive, design, fabricate and compete with small formula-style racing cars. It was the first university in Korea to build a driverless eco-friendly tram.

Yu was born in 1952, during the 1950-53 Korean War, in a salt warehouse in Busan. He graduated from Seoul National University with a major in agricultural science in 1975, and switched to business administration when he earned his master’s degree from Illinois State University in 1981 and his doctorate from the University of Illinois at Urbana-Champaign in 1986. Yu first entered the education field in 1987 when he became a business administration professor at Kookmin University, which led to a lifelong attachment to the university. He became president of the university in 2012. He said that the position requires communication, courage and sacrifice.

Yu calls himself a “coding addict,” as he watches online lectures in English about programming languages such as Python, JavaScript and Django. He says it creates a competitive spirit within him. That is why he made it a mandatory class for freshmen in 2015. His enthusiasm for education was also evident during his teaching years. To learn about the production and management process of automobiles, he personally went out on the field to about 40 parts suppliers in Korea.

The JoongAng Sunday interviewed Yu at the main campus of Kookmin University on April 21.

Q. Kookmin University is becoming known as a benchmark for universities instead of one of the top schools in Korea. What was your strategy in accomplishing this?

A. Compared to schools like Stanford or Harvard, which are like aircraft carriers considering their influence on the educational system, Kookmin University is just a several-hundreds-ton ship. The situation is the same compared to SKY universities in Korea, the three most prestigious universities — Seoul National, Korea and Yonsei. Because of the large gap between the schools, Kookmin University doesn’t have to follow in their footsteps because it doesn’t have the same capacity. How can it surpass a school that has a 1 trillion-won ($875.7 million) budget, if it follows same course? That’s why we chose to implement “strategy positioning.” It is a strategy to develop our strengths in pragmatism and community spirit.

The concept is similar to surviving in a jungle, which is important for universities.

That’s right. Being a team player is a key factor. “Team team class” and “community mapping” are some of the main projects we are carrying out. The “team team class” combines two majors like applied chemistry and ceramics. We started the project last year and created 11 more combined classes, as they produced positive results.

Your community mapping project is interesting as well.

This project shares local news on an online map, which is a project that centers on community. During the 2018 PyeongChang Winter Olympics, students made an app for disabled people that mapped 3,508 restaurants and cultural establishments that were user-friendly for disabled people. It also mapped the area around 29 elementary schools in Seongbuk District, providing data about dangerous areas and installations that keep the area safe. In an era where the number of students is dropping drastically due to the low birthrate, if universities do not cooperate with local communities, they won’t have a place [in society].

The university’s Eureka and Alpha projects are also interesting.

I decided that we shouldn’t teach freshmen business administration theory in their first semester because they wouldn’t be able to understand it. That is why I suggested teaching them classes for upperclassmen in their first two years. This is called the Eureka project, which offers experience first, and then teaches students about the theory that comes from the experience. The Alpha project is on the same page: It is a project that approves credits for club activities to students who successfully create a start-up through their clubs.

Why do you emphasize working as a team?

We need stars, but people can “make” when they think, express and act as a team. That is why we don’t have to compete with Seoul National University or the Korea Advanced Institute of Science and Technology.

Do you have experience in automobiles?

Before SsangYong Motors was disbanded, I asked the company to make a department for automobiles in our school. The company provided us with a lot of equipment so we were able to practice right away. We were the first to teach the design tool Catia. The department earned a reputation as students’ skills were exceptional. We also made a college of automotive engineering, the only one in Korea. This is all thanks to our students’ obsession with cars.

What problems do you have?

Goethe once said that a young person without a dream is like a corpse without life. The future of self-driving cars relies on the challenges we face to achieve our dreams. The knowledge of people who haven’t created anything is like a stream, whereas people who have created something with their own two hands have knowledge as deep as the ocean. The key factor to becoming successful in the fourth industrial revolution is hands-on practice. Yet we don’t have any data about self-driving cars or artificial intelligence (AI). We need to lift restrictions on these fields because we can’t go forward without any data. Look at China, they are advancing with flying colors [without any restrictions holding them back].

The Ministry of Education’s financial support system is changing universities. What do you think about the system?

There are a lot of positive effects that the system offers, being the only way to turn the tables on university rankings. Schools will forever be in competition with one another. On the other hand, there are side effects to the system, like the standardized assessment of universities and the excessive demand for data from the schools [by the Ministry of Education]. This will have to be reformed.