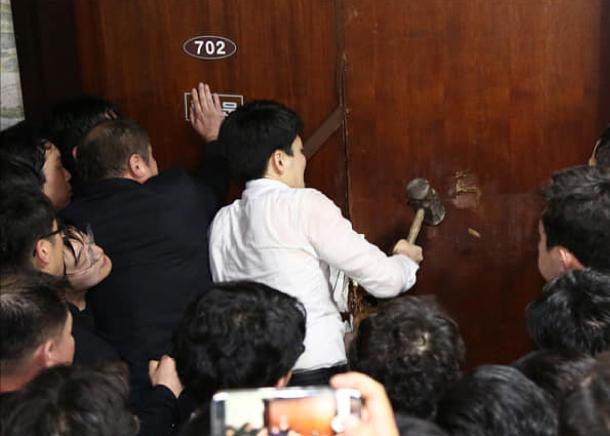 Lawmakers of the Democratic Party (DP) and the main opposition LKP were locked in physical standoffs from Thursday afternoon until early Friday morning as the LKP lawmakers tried to stop the special committees on political and judicial reforms from holding meetings.

The bills are aimed at creating an independent investigative agency dedicated to investigating corruption by senior public servants, redistributing investigative powers between the police and the prosecution and revising the Criminal Procedure Act.

The DP and three opposition parties - Bareunmirae Party, Party for Democracy and Peace (PDP) and Justice Party - have formed an alliance to fast-track the package of four contentious bills, while the LKP fiercely opposed. The four parties decided to start the fast-track process on Thursday, and the contentious bills were all submitted to their corresponding committees as of Friday evening.

As the scuffles turned extremely violent, National Assembly speaker Moon Hee-sang exercised his right to ask the government to send police to the legislature around 7:15 p.m. on Thursday to regain order. It was the first time in 33 years that a speaker used the right.

By 9 p.m. on Thursday, the DP concluded that the four bills were all submitted to the National Assembly and intended to begin deliberation processes at the special committees.

Brawls intensified around 1:15 a.m. on Friday, as DP lawmakers attempted to forcibly open the doors to meeting rooms to start the fast-track process, while LKP lawmakers tried to stop them.

By 2:25 a.m., DP lawmakers started using hammers and a crowbar to break a door. During the process, some National Assembly workers and lawmakers’ aides were injured, while two LKP lawmakers and party members collapsed and were sent to hospitals.

After a further clash, the DP lawmakers on the Special Committee on Judicial Reform moved to another committee room and opened a session around 2:40 a.m., but they failed to designate the bills as fast-track items, as the quorum was not satisfied.

Lawmakers of the DP and the LKP continued their standoff throughout the night. The two sides temporarily declared a truce around 4 a.m. on Friday.

The DP held a meeting at the National Assembly later in the morning and decided to urge a criminal investigation into the LKP’s attempts to obstruct the legislative processes.

“The LKP brought about unimaginable violence to the National Assembly,” DP Chairman Lee Hae-chan said. “Those who broke the law must face punishment.”

Rep. Hong Young-pyo, floor leader of the DP, said the party will petition the prosecution to start a criminal investigation into the LKP lawmakers.

Later in the afternoon, the DP submitted a petition to the Seoul Central District Prosecutors’ Office to investigate 18 lawmakers, including Rep. Na Kyung-won, floor leader of the LKP, and two aides on charges of violating the clauses banning violence in the National Assembly Act.

The National Assembly Act was revised in 2012 to introduce stern punishment against the use of force in the legislature.

Anyone who stops a lawmaker from entering a plenary session or a committee meeting and those who use force to interrupt a session are punishable by up to five years in prison or a fine of up to 10 million won ($8,620).

The law also says anyone punished with a fine over 5 million won for obstructing a legislative activity is deprived the right to run in an election for a minimum of five years - a tremendous setback for any politician.

The LKP held a meeting around 8 a.m. at the National Assembly and blamed the DP for the brawls.

“Last night, we resisted with every fiber of our bodies to protect liberal democracy,” said Na. “What we are seeing is a coup in the legislature. We will try to stop the leftists’ attempt at a dictatorship with all possible means.”

Meanwhile, the Bareunmirae Party, one of the DP’s allies, hinted that it may slow down its campaign to fast-track the contentious bills.

Rep. Kim Kwan-young, floor leader of the party, said Friday that he will take time to explain and apologize for his actions.

Kim stirred controversy by abruptly replacing the Bareunmirae Party’s two members on the Special Committee on Judicial Reform on Thursday.

In his message to the party lawmakers, Kim said Friday that he had done so to push forward the deal struck with the DP and other parties, apologizing for hurting their feelings and angering other party members.

Kim replaced the party’s two lawmakers on the committee after Rep. Oh Shin-hwan openly defied the decision to compromise with the ruling party and threatened to use his vote to strike down the bills.

Kim, then, replaced him with the more compliant lawmaker Rep. Chae Yi-bai.

The Bareunmirae Party was scheduled a general assembly of lawmakers starting at 5 p.m. on Friday.

It may be possible that other lawmakers of the party will try to hold a vote of no confidence to remove Kim from his floor leader position for his actions.

Shortly after 80 LKP lawmakers protested at his office on Wednesday, Moon was taken to a nearby hospital due to what his spokesman said was “shock from low blood sugar.”