8K TVs’ pixels may be more than enough

8K TVs’ pixels may be more than enough 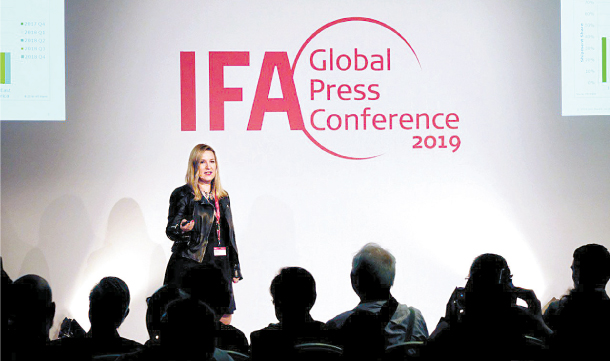 If you think 4K was a dramatic step up in terms of picture sharpness, 8K TVs have 16 times more pixels than 4K. Since starting sales last year, Samsung Electronics has made 8K the focal point of its TV business. LG Electronics launches its 8K TVs in the second half of this year. Sony and TCL also showed 8K television at the Consumer Electronics Show in January.

But aside from the hype, is 8K resolution something consumers actually want?

Not for the next five years, said Maria Rua Aguete, executive director at IHS Markit for Technology, Media & Telecommunication markets. A specialist in content providers, Aguete was one of four tech market researchers to give an industry briefing at the IFA Global Press Conference held last Friday and Saturday in Huelva, Spain.

“We’re realizing in Europe, people say this is too early - [that there’s] no point at all to speak about 8K,” she told the Korea JoongAng Daily. “It will not happen in the near future. Our projection figures are very low.”

Last week, IHS Markit lowered 2019 sales projection for 8K television to 30,900 units a year. This was an 8.5-percent cut from January and a 30-percent drop from last October’s forecast.

This year, 8K TV sales may account for a mere 0.14 percent of all TV sales in the world. Even in years to come, the IHS Markit report said, the percentage won’t get any higher than 3 percent in 2023.

Technology companies always want to push technology boundaries, added Aguete, but at the moment there “seems to be a disconnect” between consumers and 8K TV makers.

Aguete pointed out that even 4K TVs - the previous top product in terms of resolution - have yet to catch on in a big way. Their global penetration rate was 8.8 percent as of last year.

One problem hindering the products’ growth is the price tag. An 8K TV can easily cost over $10,000 for an 85-inch TV. There’s also a lack of content - movies or shows that can be seen in such arresting resolution. For content producers, creating movies or shows with higher resolution costs a lot.

“Very few [channel] operators have full ultra HD channels,” said Aguete. “If they already have worries about the costs for 4K, imagine what they’ll think about 8K.”

Both 4K and 8K fall into the category of UHD screens, short for ultra-high definition.

According to IHS Markit, Korea has the largest number of paid TV operators offering UHD visuals: six. The Netherlands came in second with five, but most European companies and Japan had between one and three.

Aguete said China may dominate 8K one day. Ironically, China had the largest penetration rate of UHD television sets in Asia at nearly 20 percent last year despite having very little in the way of 4K content. The Asia-Pacific average was 5 percent.

“In China, 4K TVs are status symbols. It’s the latest technology to show your friends when they come by your house. It doesn’t matter if anyone watches or not,” she said.