All food is fast food in the smartphone era

All food is fast food in the smartphone era

It has been less than a decade since the first food delivery platform launched in Korea in 2010. The market has grown exponentially over recent years to the point where almost any company - from retailers to a messaging app - is desperately looking for a way into the industry.

Compared to 2013, when food delivery apps started to take off as smartphones became more common, the number of users have jumped up from just 870,000 to an estimated 25 million this year, according to data from Fair Trade Commission released last month. This means roughly one out of every two Koreans is using a delivery app.

E-commerce giant Coupang said it will launch a trial version of a food delivery platform as soon as it can, while WeMakePrice introduced its service in April. KakaoTalk started offering the service last year while some restaurants like Kyochon Chicken and Mom’s Touch have launched their own delivery platforms. Even Uber, which has found little success in Korea after its ride-hailing service was shut down in 2013, re-entered Korea with Uber Eats in 2017.

The prevalence of such delivery services has led to the birth of new businesses like shared kitchens and delivery services with established infrastructures nationwide. The platforms simultaneously stirred up social controversy due to the excessive use of disposable items for food packaging and unrestricted selling of alcoholic drinks to minors.

The introduction of smartphones in Korea in 2009 has transformed many aspects of the way people carry out their daily routines. People started using messaging apps instead of sending text messages and stopped carrying mp3 players or cameras.

The platforms were able to rapidly expand their influence in Korea, largely thanks to the already established food delivery infrastructure.

“Food delivery apps were able to grow exponentially in Korea because we already had the infrastructure to deliver food,” said a source from the industry. “Even before the apps surfaced, Koreans were very used to getting food delivered. The difference is that they personally called the restaurant. All that local food delivery app providers needed to do to succeed was to innovate the service with the existing infrastructure.”

“Korea has megacities, with more than 25 million people living in the capital areas: Seoul, Gyeonggi and Incheon,” said Seo Yong-gu, a professor who teaches business at Sookmyung Women’s University. “The highly concentrated population in certain areas and the fact that most people are living in apartments make delivery in Korea much easier.”

The gradual increase of single-person households, less likely to regularly cook for themselves, is another factor that has resulted in market growth, according to Seo.

Baedal Minjok, known as Baemin, saw a 20 percent monthly growth in single-person orders since it opened the category in August last year, while Yogiyo saw a monthly jump of 30 percent in the same category since November last year.

As of 2017, 28.6 percent of households in Korea are single-person households, a big jump from 9 percent in 1990. The marriage rate last year dropped 2.6 percent on year to stand at just 257,000, the lowest figure since Statistics Korea began compiling data in 1970. 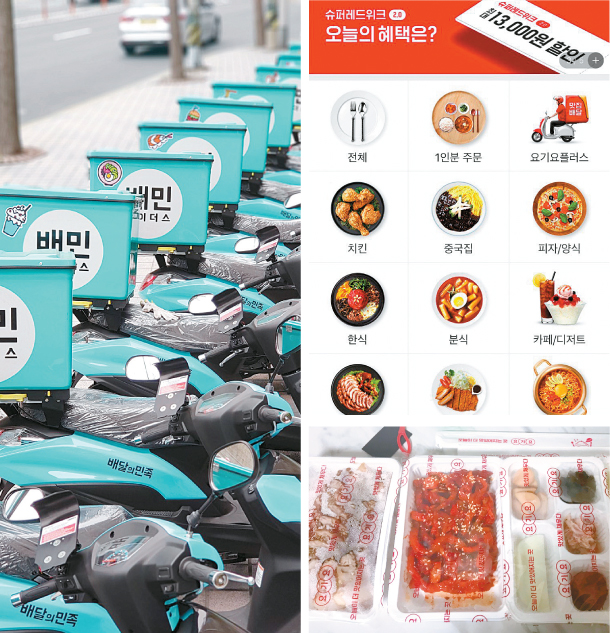 Clockwise from left are the Baemin motorbikes that Baemin Riders use to deliver food; a screenshot of the Yogiyo app; and a range of side dishes delivered in disposable packaging with a single order of boiled pork. [BAEMIN, JIN MIN-JI, SCREEN CAPTURE]

Baemin currently stands as the dominant leader in the market, followed by Yogiyo and Baedaltong - the two are operated by Delivery Hero Korea.

Seeing their success, new players have begun offering similar services at a much lower price in a bid to secure a larger slice of the pie.

Uber Eats, for instance, covered delivery fees for more than a year after it entered Korea in August 2017. It was only in February that the company started collecting a 2,500 won ($2.15) delivery fee for orders made in Seoul.

Baegofa, launched in February, gives out points that can be spent as cash. Users can receive up to 3,000 points per month just by reviewing restaurants. It also gives out points when users download other apps linked to its platform. Points range from 100 won to several thousand won.

E-commerce players have also jumped in, hoping to succeed with their established networks and distribution centers.

“WeMakePrice has built regional networks during its years of running an e-commerce platform,” said a spokesperson for the company. “Our merchandisers, who cover different areas, have built strong networks with small and medium-sized restaurants. We believe the networks will allow us to introduce a wider selection of restaurants to our users.”

Since 2011, WeMakePrice has been selling vouchers for places like restaurants and cafes.

“Coupang has a major strength in distribution systems,” said Seo. “It already has 24 distribution centers nationwide, and therefore will have enough competitiveness to run a food delivery platform and ultimately operate its own delivery system without much additional cost.”

Despite the increasing competition, existing players are not that concerned.

“For e-commerce operators, food delivery is a business they delay until the last moment because of the difficulty of the service,” said a source from the industry. “For e-commerce businesses, launching a food delivery platform is part of their effort to expand their portfolio to reach into every aspect of people’s lives. To them, what matters is how efficiently they deliver diverse services, not just food”

The source added, “I don’t think they’ll all-in on the food delivery service.”

One issue with food delivery platforms is that they could be exploited as a means for underage drinkers to purchase alcohol.

Food delivery apps attempt to counter this by making it mandatory for users to sign into the app before purchasing alcoholic drinks and telling delivery drivers to check user identification before handing over the drinks. But this system hasn’t proved successful.

A January report from the Ministry of Gender Equality and Family shows that 32.2 percent of minors who purchased alcoholic drinks last year bought them via food delivery apps. On a separate survey conducted a year before, the figure stood at 29.6 percent. Around 15,000 teenagers nationwide took part in each survey.

Baemin, for example, requires delivery drivers to check ID cards before handing over alcoholic drinks, according to the company.

“But some restaurants deliver food in partner with other delivery firms, and Baemin can’t confirm whether delivery drivers from other companies check the customer’s age,” said a source from the industry.

“We’re so busy [especially at around dinner time] that it’s almost impossible to check ID,” a delivery driver said after handing over a bottle of Singha beer. He then hastily rode away.

The use of disposable packaging is becoming a major concern.

Most delivery food comes wrapped and packed with all sorts of plastic items, from plastic spoons and forks to plastic bags and copious amounts of plastic wrap.

Industry insiders say using disposable packaging and dishes is an inevitable choice to cut down on costs.

“Using recyclable packaging will naturally raise the price of the service, which will likely cause a backlash from users and further burden restaurant owners that are already suffering from the rapid minimum wage increase,” said the owner of a restaurant in western Seoul.

“Though it depends on the types of food, there are at least five disposable items for each delivery, including the plastic containers carrying side dishes and soup,” said a delivery man in central Seoul on Friday last week. “But using disposable packaging seems inevitable considering the cost of labor and fuel.”

The average cost for a single delivery stands between 3,300 won to 7,000 won, depending on the distance.

The problem doesn’t just lie with the use of disposable items, but also the issue of separating waste.

“Many people who use food delivery apps are single-person households,” said Kim Tae-hee, policy director at Korea Zero Waste Movement Network, a non-governmental organization. “Since they don’t create as much waste [as people living with family], they tend to throw away everything together without separating them by material. That’s especially common in university areas.”

“The Ministry of Environment has started regulating [certain] retailers and coffee chains, but hasn’t yet introduced measures to regulate food delivery apps. Voluntary actions will be required until the measures are introduced,” Kim added.

The Ministry of Environment is expected to bring out a roadmap regarding the use of disposable items for food deliveries in the first half of this year. It will be the part of the ministry’s effort to reduce plastic waste by 50 percent by 2030.

Survey results from research firm Opensurvey highlight the need for restaurants to lessen the use of disposable items, not just for the environment but also for their customers. A survey in April showed almost half of participants said the use of disposable packaging by food-delivery restaurants should be regulated even if that comes with additional costs for customers.

Among 1,500 participants, 57.2 percent said the use of disposable items should be regulated while 43.9 percent showed the same stance even if the service would come with additional costs. 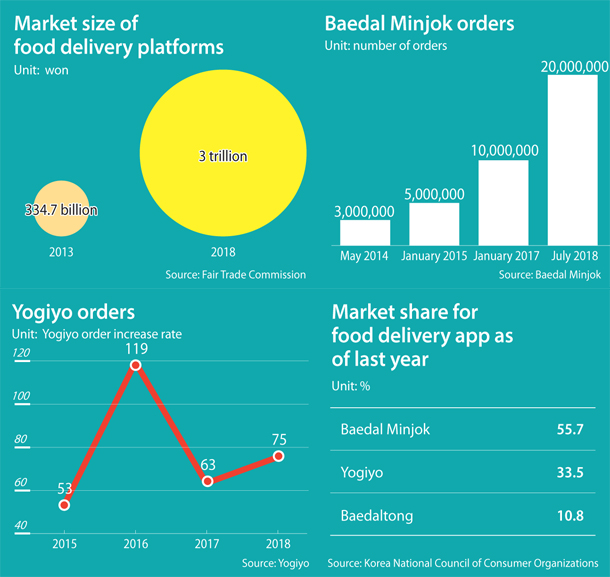 Most notable is the boom of delivery driver companies.

“There have been [a number of] delivery companies in the past, but we have branded delivery drivers,” said a spokesperson for Baemin. “Our riders carry a unified delivery bag, ride the same motorbikes and wear the same helmets, giving them a sense of identity.”

A spokesperson for Vroong said, “Restaurants used to hire drivers. But with the increased demand for food delivery and the sudden rise in the minimum age, more restaurants have started to prefer delivery services as they can pay by the number of deliveries made.”

Shared kitchens have also seen a boost over recent years.

Shared kitchens have become a popular option among people who wish to start a restaurant but have been reluctant due to high costs.

Shared kitchens offer a space and tools for a monthly fee, saving users money on rent, deposit, premiums and other costs of setting up their own kitchen.

Simple Project Company, which operates We Cook, opened the first shared kitchen in Korea in 2015. A slew of other companies followed like Simple Kitchen and Monthly Kitchen.

In the longer term, food delivery platforms could foster the robot delivery business.

Dilly had its first successful test run at a food court in Cheonan, South Chungcheong, in May last year. The plan is to gradually expand Dilly’s boundaries from indoors to outdoors until it is able to fully run on its own on the streets.

“We’ll continuously test the robots until they are able to deliver food outside,” said a spokesperson for Baemin. “We’re guessing it’ll take around five years for such a service to become a reality.”