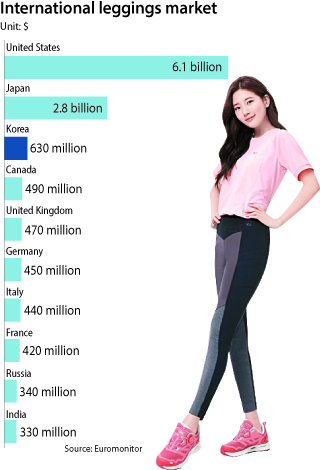 Leggings, which seemed to be going out of style in recent years, are making a comeback as versatile outdoor sportswear - for men and women - that can be worn anywhere, from the golf course to a nearby mountain.

“When you wear it, it feels different,” said a 44-year-old man surnamed Park.

He was standing at the foot of a hiking trail at Mount Bukhan, northern Seoul, on a recent Saturday wearing skintight leggings.

When asked if he felt at all embarrassed by wearing something so tight and revealing, he replied, “Aren’t there a lot of people wearing these?”

A few years ago, some were critical about those wearing tight and revealing sportswear, but recently both women and men have embraced the look.

Leggings, which used to be difficult to find outside of yoga studios, are now a staple for many doing outdoor activities as well.

“As people began to prefer exercising indoors and the cost of the material went down, clothes worn for performances, including leggings, have gradually become popular,” said Lisa Hong, senior analyst at Euromonitor. “Since the line between casual wear and sportswear is blurred these days, the demand for comfortable and stylish sportswear is consistently increasing.”

Local retailers have also been responding to the demand.

Lotte Department Store opened Lululemon, the Canadian athletic apparel retailer, on the third floor of its Myeong-dong branch earlier this month. Lululemon is a high-end brand that brought the leggings craze to the U.S. market. Its pants cost between 130,000 won ($113) and 180,000 won.

The number of leggings brands sold at Lotte Department Store has more than tripled compared to four years ago.

Sportswear brands like Andar and Mulawear have been especially popular online and recorded 30 billion won to 40 billion won in sales in 2018.

Outdoor sportswear brand K2 released its own pair of hiking tights in March. Since its debut, around 4,000 pairs have been sold.

“We have produced about 25,000 leggings this spring, and we expect the rate of sales to be at 70 percent,” said Ji Chul-jong, vice president of K2 Korea.

Other outdoor brands such as Nepa and Millet are also planning to release leggings this season.

Leggings are even making their way to the golf course. Golf brand Castelbajac is planning to release a pair of leggings next month.

“The product will be sold exclusively online and can be worn both while playing golf [and] in our daily lives,” said a source from Castelbajac.

According to Euromonitor, the leggings market in the United States is worth $6.1 billion, which is three times larger than it was in 2013.