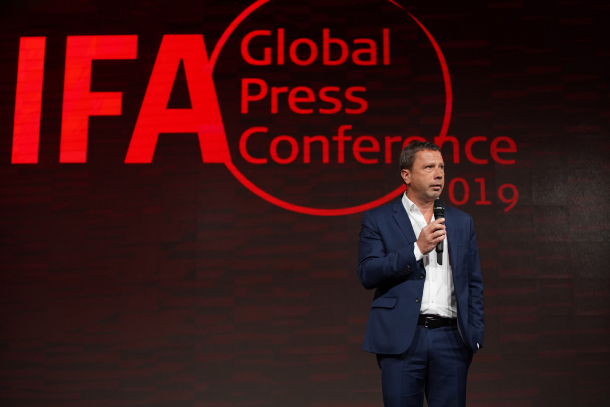 But competitors are nipping at their heels - and Korean technology may not be enough to keep them at bay.

Selling the right products in the right markets is key, said Jens Heithecker, executive vice president of Messe Berlin Group and executive director of Internationale Funkausstellung IFA Berlin, which runs the largest and oldest electronics appliances trade show in Europe. The next IFA Berlin will be held from Sept. 6 to 11.

“For the consumers, it is sometimes tough to understand what it means to buy products on the high or not-so-high standard,” he said. “[Companies] need to have products suitable for the market - for different market needs.”

China is the competitor Korean companies have to watch most carefully - especially in terms of their technological competitive edge.

“If it comes down to technology, Korea is leading in embedding technology meaningfully into products,” said IFA director Dirk Koslowski.

The two executives spoke to Korean reporters during the IFA Global Press Conference, a two-day event in Huelva, Spain, in which reporters from around the world are given a sneak peak at what to expect at the IFA Berlin in September.

A reoccurring theme in the two day preview was the increased importance of China, not only as a consumer market but as an exporter of appliances to Europe. Among six companies that introduced regional strategies at the event, China-based TV manufacturers TCL and Hisense were the only two that were not headquartered in Europe.

“Chinese companies are gaining global market share - but we’re talking about different levels,” said Heithecker. “When talking about telecommunications, they’re coming up very strong, very fast, highly innovative. If we look at other markets, home appliances, such as TV - there is a difference.”

Heithecker said Chinese companies are on a two-track strategy: trying to innovate in technology while also acquiring European brands to strengthen their footholds in markets.

According to market research firm GfK, Chinese companies’ share of major domestic appliances in Europe rose to 13.1 percent last year from 0.6 percent in 2017 after the acquisition of European brands.

While agreeing that 5G is a “revolutionizing technology,” Heithecker said it will “take more time than expected” to commercialize 5G and for its services to be actually profitable.

“Korea is very fast in this [field],” he said. “If you see other countries in Europe and America, they won’t integrate new 5G solutions that fast, depending on different regulations by the government.”

“In Korea, it’s a bit easy because the majority of people live in big cities. If you go to other countries, infrastructure is much more expensive because in the countryside it’s not so easy to build 5G networks. So think in two ways - What can we do in metropolitan areas and what are the solutions in countryside areas?

“If you go back to 4G or 3G, it took three to five years to commercialize and find the right business models,” he continued. “There is a huge field to conquer.”

The IFA Global Press Conference also gave an overall forecast for the global electronics market this year. GFU, the German business association for consumer and home electronics companies, said that it expects the global market for consumer goods to increase 1 percent in turnover to 1.05 trillion euros ($1.172 trillion) this year, following 3.3 percent growth in 2018. Europe, North America, the Middle East and Africa were highlighted as growth markets.