Assembly was calm but tense over weekend

Assembly was calm but tense over weekend 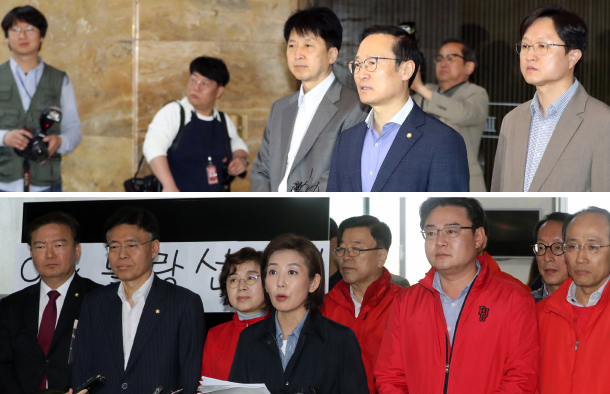 A tenuous stalemate held in the legislature over the weekend as the ruling Democratic Party (DP) and its allies prepare to once again fast-track contentious bills on electoral reform and corruption investigations that the main opposition Liberty Korea Party (LKP) objects to violently - in the literal sense.

The disagreement turned into a violent overnight scuffle at the National Assembly Friday that ultimately prevented two committees from holding sessions to clear bills on electoral reform and the establishment of an independent agency focusing on crimes by high ranking public servants.

No attempts were made over the weekend by the DP or its partners - the Justice Party, the Party for Democracy and Peace, and part of the Bareunmirae Party (BP) - to have the committees meet, but lawmakers on both sides were on standby in case someone tried.

Instead, the DP complained to prosecutors that 18 LKP lawmakers incited violence to try to stop the bills on Friday, claiming they violated an amendment to parliamentary law passed in 2012 that outlaws violence at the legislature. For its part, the LKP insisted that its lawmakers’ conduct was in self-defense against what it claims were illegal actions by the DP and its allies. It fired back by filing a complaint about 15 DP lawmakers with the prosecution.

While the ruling party wants to fast-track the bills as soon as possible, its junior partner in the endeavor, the BP, is causing problems.

On Thursday, BP floor leader Rep. Kim Kwan-young removed two of his party’s lawmakers from the judicial reform committee due to their dissenting opinions on the agency bill, replacing them with compliant allies. A dissident faction of the BP demanded Kim step down, saying the floor leader’s unilateral decision to make personnel changes on the committee violated parliamentary law. But on Sunday, the National Assembly’s Secretariat ruled Kim’s decision acceptable, saying the party leadership had such authority.

Despite rumors that the dissident wing of the BP would split off, Rep. Yoo Seong-min, the faction’s de facto leader, denied on Sunday that he and a handful of his fellow lawmakers would return to the LKP.

Nonetheless, their vehement opposition to the agency bill - on the grounds that the new unit would be too strong if given the authority to indict - has put Yoo’s faction closer to the LKP.

The LKP has played up the message that through the bills in question, the Moon Jae-in administration plans to build a “leftist dictatorship” by gaining a legislative majority with the electoral reforms and crack down on dissenters with the new agency.

To rally public support to its cause, the LKP on Saturday held a large rally in central Seoul akin to one it held a week earlier. At the rally, floor leader Na Kyung-won said her party would “defeat the leftist dictatorship and defend liberal democracy” by defeating the fast-tracking of the bills.

Four teams of LKP lawmakers and their aides rotated on standby at the National Assembly in case DP lawmakers, also on standby, tried again to convene the committees.