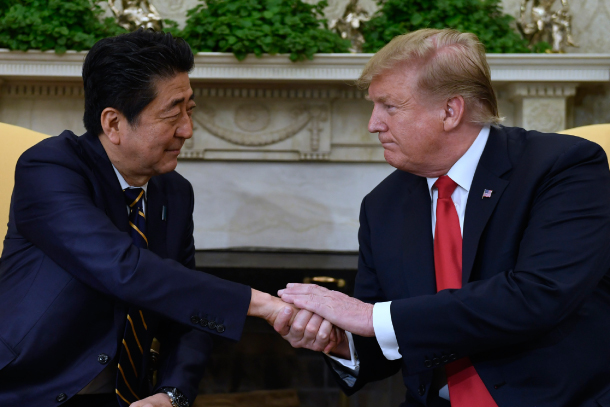 “We are defending wealthy countries. They can well afford to pay us,” Trump said Saturday in a campaign rally at the Resch Center Complex in Green Bay, Wisconsin. “There’s one country, I don’t want to say it, I don’t want to embarrass anybody […] I called the country. I called and said, listen, no good.”

Given the context and Trump’s earlier statements, it was obvious he was referring to South Korea.

“We are losing $4.5 billion. We can’t do this anymore,” Trump said. “He got very upset, angry […] He said, well, we will give you 500 million more, because the budget, you see, had already been set. I said, I want more. We argued. They paid us more than $500 million more for one phone call. I’m not bragging.”

Trump, in a cabinet meeting on Feb. 12, said something very similar.

“South Korea - we defend them and lose a tremendous amount of money,” he said. “South Korea is costing us $5 billion a year. And they pay […] about $500 million […] they agreed to pay, yesterday, $500 million more toward their defense. Five-hundred million, with a couple of phone calls.”

That statement came just a few days after the United States and South Korea signed a one-year agreement on defense costs for 2019. The agreement on Feb. 10 said that South Korea would pay 1.03 trillion won ($888.8 million) for the upkeep of the U.S. Forces Korea (USFK), 8.2 percent more than what it spent last year.

It was the first time Seoul had ever agreed to pay above the 1-trillion-won mark.

Seoul paid around 960.2 billion won in 2018, which was known to be about half the total expense for stationing the USFK, though neither the South nor the United States has explicitly revealed how much Washington was paying for its troops - in other words, both countries roughly paid the same amount.

Trump, at his Saturday rally, suggested he will keep asking the country to pay more.

“I said, I understand you have budgets. Next year, which now turns out to be in about two weeks, I said we will call you for much more,” he said. “One phone call, we pick up $500 million. That’s not terrible. We will pick up a lot more.”

Trump’s statement came a day after a summit with Abe at the White House on Friday.

In the meeting Trump agreed to work together on the issue of Japanese nationals abducted by North Korea, according to Abe’s statement to Japanese media.

Trump told Abe that he had discussed the issue with North Korean leader Kim Jong-un during his second summit with Kim in Hanoi, Vietnam, in February, and that he will cooperate with Japan on it, NHK World reported Saturday. The two also discussed ongoing negotiations for a new trade deal and reaffirmed their stances on maintaining sanctions on the North.

There are concerns of a schism between the United States and Japan on one side and Russia, China and North Korea on the other, especially after Russian President Vladimir Putin held his first summit with Kim on Thursday in Vladivostok.

But Trump, in a press briefing at the White House Friday, said he welcomes the latest development.

Putin told the press after the meeting that Russia supports a step-by-step process to reach denuclearization of the North.

“He wants to see it done also,” Trump said “I think there’s a lot of excitement for getting a deal done with North Korea.”

Putin held a summit with Chinese President Xi Jinping on Saturday on the sidelines of Beijing’s Belt and Road Forum, which focused on a joint vision toward Eurasian integration. Tass news agency reported that Putin provided a detailed briefing on his meeting with Kim to Xi and discussed the situation on the Korean Peninsula.

Putin noted that Russia and China’s joint initiative for resolving the Korean Peninsula issue is moving into the next stage of normalization of relations among related parties.