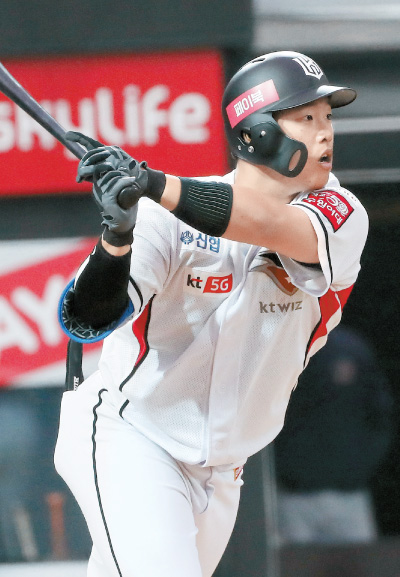 Kang Baek-ho of the KT Wiz watches his hit during a game against the NC Dinos at Suwon Baseball Stadium on April 23. [YONHAP]

While the KT Wiz are back in familiar territory on the lowest rungs of the KBO standing, sophomore star Kang Baek-ho is proving for a second year that being in a low-ranked team doesn’t mean you can’t stand out from the crowd.

Looking at the Wiz’s lineup this year, Mel Rojas Jr. and Hwang Jae-gyun are clearly more experienced players with wisdom to offer their younger teammates. But glance at the numbers and it becomes very clear that it is 19-year-old Kang that leads the batting lineup.

Young Kang, on the other hand, has four home runs and a batting average at .299, the highest on the team.

Kang’s success is even more impressive, as he isn’t even close to being one of the highest paid Wiz players. While Rojas receives $1.6 million in annual salary and Hwang makes 1.2 billion won ($1.04 million), Kang is taking home just 120 million won.

Although that still makes him the highest paid sophomore pro in the KBO, his annual income is only 7 percent to 10 percent of Hwang’s and Rojas’.

Standing at 1.84 meters (6 feet) and 98 kilograms (216 pounds), Kang is the youngest player in the Wiz’s batting lineup. During his rookie season last year, Kang left a strong impression on the KBO as a slugger, hitting 29 home runs and 84 RBIs. But this year, Kang stands out for his ball speed and as an all-around player.

Having played as a catcher and a pitcher while in high school, Kang has decided to focus on the outfield in the KBO. As he is least familiar with playing as an outfielder, Kang plays more regularly as designated hitter than an outfielder.

Although Kang is not yet ready to be the Wiz’s starting right fielder, he has proven to be a crucial member in the lineup as an all-around player. During the Wiz’s game against the Lotte Giants on April 20, he made a surprise position change to catcher at the bottom of the ninth inning.

Despite the Wiz losing the game that day, Kang successfully fulfilled his role as catcher for one and one-third of an inning. Although it was the first time in a while that Kang had been behind home plate, his throws impressed Giants’ manager Yang Sang-moon, who said, “I was really surprised by his throws to second base. He’s actually a catcher.”

Kang has received compliments after his short stint as catcher, but made it clear that for now, he is only thinking about being a better outfielder.

“More than a catcher, I want to be an outfielder,” Kang said. “It’s not easy to have good batting while being a catcher.”

While Kang is having another solid season in the professional league, the Wiz aren’t doing any better this season. They’ve managed to avoid last place after the weekend series, but weren’t able to avoid being swept by the SK Wyverns.

As the Wyverns swept their series, they have successfully maintained the top spot in the standing and are now on a seven-game winning streak. Along with the Wyverns, the Doosan Bears also swept their weekend series against the Giants to be ranked second, without a game difference.

Since both the NC Dinos’ and the LG Twins’ Friday games were rained off and won the other two games, they are tied at third while the Kiwoom Heroes took fifth after winning their series 2-1 against the Kia Tigers over the weekend.

The Tigers are still at the bottom of the standing.

This season, the KBO teams are seeing a big gap between the upper and the lower half of the teams. The top five teams - Wyverns, Bears, Twins, Dinos and Heroes - are within three games of one another. Although the Heroes currently have the last postseason spot, they are not too concerned about the sixth ranked Eagles, as they are 4.5 games behind.

The bottom five ranked teams - Eagles, Giants, Lions, Wiz and Tigers - are also just three games apart from one another.