Kim Sei-young rallied on the final day to finish runner-up at the Hugel-Air Premia LA Open at Wilshire Country Club in Los Angeles on Sunday. 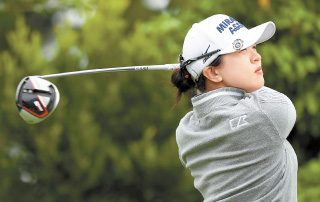 Kim Sei-young watches her shot during the final round of the Hugel-Air Premia LA Open at Wilshire Country Club in Los Angeles on Sunday. [GETTY IMAGES/YONHAP]

With six birdies and a bogey, Kim shot five under par, 66, on the final day to finish the LPGA tournament four shots behind the winner, Minjee Lee of Australia.

Kim, who started the final round tied for sixth, got off to a quick start with back-to-back birdies on the par-4 third and the par-3 fourth, before adding another on the par-3 seventh. After a bogey-free first nine, Kim had three straight birdies from the par-5 13th to the par-5 15th to lower her score once again, but finished with a disappointing bogey.

“I think this golf course is not an easy event [for a] regular tournament,” Kim was quoted as saying on the LPGA website. “The greens are really fast, and if I miss the wrong side it’s tough to get up and down. Even though I’m very satisfied with my playing. Yeah, I’m very happy with my score.”

Although Kim wasn’t able to win the tournament, this is her best finish of the season. This season, Kim got off to an inconsistent start, including missing one cut. Prior to Sunday’s runner-up finish, Kim’s best finish was tied for 10th at the Bank of Hope Founders Cup in March.

Kim’s last victory was in July 2018, when she won the Thornberry Creek LPGA Classic. Throughout her five seasons on the LPGA Tour, Kim has won seven events.

Amy Yang shot an impressive seven under par, 64, on the last day to finish the tournament at tied for fifth, along with world No. 1 Ko Jin-young and Park In-bee.

The LPGA players will continue their season in California this week at the LPGA Mediheal Championship, which starts from Thursday.

While Korea’s female golfers managed to get their names in the top 10, the PGA Tour’s Lee Kyoung-hoon also had his best finish, tied for third, at the Zurich Classic of New Orleans at TPC at Louisiana on Sunday.

The Zurich Classic is a team event on the PGA Tour, where two players team up for a four-day stroke play. During the first and the third round, each team plays alternate shots and plays better ball during the second and the fourth day.

Lee, who teamed up with Matt Every of the United States for the weekend, shot four under par, 68, on the final day to finish the tournament at 21 under par to be tied for third.

Jon Rahm of Spain and Ryan Palmer of the United States won the tournament at 26 under par.

Lee turned professional in 2010 and joined the OneAsia Tour in 2011 through the qualifying school.

After a year, Lee joined the Japan Golf Tour and won his first tournament as a pro at Nagashima Shigeo Invitational Sega Sammy Cup in July 2012.

Following his successful season, Lee headed to the United States to play on the Web.com Tour and during that time, Lee managed to add another win on the Korean Tour by defending his title at the Kolon Korean Open.

This year, Lee earned his status to play on the PGA Tour, finishing inside the top 25 at the season ending money ranking on the Web.com Tour last year. In 18 tournaments so far this season, Lee made 10 cuts and had four top 10 finishes.