After hiatus, Nu’est is back to full strength

After hiatus, Nu’est is back to full strength 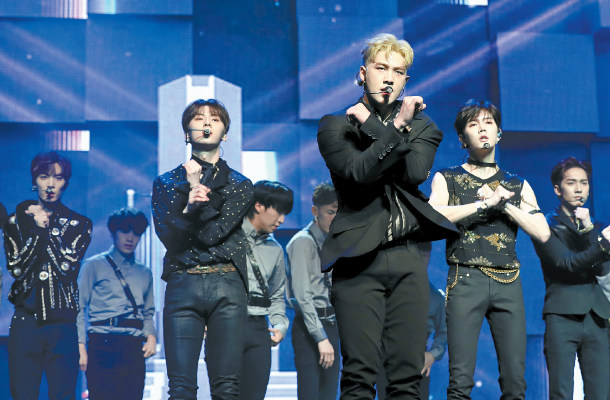 Boy band Nu’est made its return to the stage as a five-member act for the first time in three years on Monday to introduce its latest EP “Happily Ever After.” The group has performed separately since 2017, when member Minhyun, second from left, became a member of the project band Wanna One. [NEWS1]

They have been apart for nearly three years, but the five members of Nu’est haven’t missed a beat. The group made its long-awaited comeback on Monday with a new EP titled “Happily Ever After,” telling fans that the group is ready to begin a new chapter.

For the past year and a half, the boys have been performing as the four-member Nu’est W while member Minhyun performed with the project boy band Wanna One starting in the summer of 2017. The group’s most recent release was its fifth EP “Canvas” in 2016.

As all fairy tales end with the characters having their own happy endings, the band members wanted to emphasize their happiness when they sing and perform together.

When asked about what the band’s own definition of happiness was, member Ren replied, “I think the word happiness refers to now.

“We’ve worked hard to get to where we’re at now, and we feel the happiest when we receive love from our fans and get compensated [for our work].”

The band and its passionate fan group, known as Love, couldn’t help but be excited for the band’s return to the K-pop scene. The video for the group’s 2012 debut music video “Face,” reached 100 million views on Sunday afternoon.

In response, the group’s lead single “Bet Bet” is about betting everything one has on one’s lover - in this case, the lover seems to refer to the fans.

The song’s mixture of elements from the future bass and R&B genres offers a unique and strong rhythm that is both polished and energetic, much like the band’s impressive choreography.

“If you lose me, you’ll regret it,” the lyrics say, sending a confident and powerful message to listeners.

On the other hand, “Segno,” the first song the EP offers, is anchored by a slow, rhythmic beat, creating the mood one may have while walking through a quiet forest.

Segno is an Italian term used in music composition that literally translates to “from the sign,” and is used to refer a reader back to a certain part of the score and repeat the music that is written.

As the title implies, this song is a reminder from the band to fans that it has started this new chapter as a complete group with a mindset “to go back” from the start, but to not to forget the journey that it has gone through.

Nu’est’s sixth album was released at 6 p.m. on Monday.