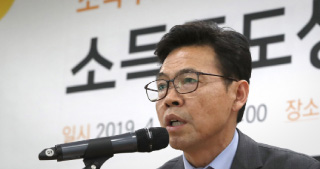 Hong Jang-pyo, chairman of the Special Committee on Income-led Growth and former senior presidential secretary for economic affairs, delivers a speech at a debate at the Seoul Global Center on April 22. [YONHAP]

A couple were dating for a while and were old enough to get married. The decision to get married is not easy. They may wonder whether their current significant other is the best, or whether they missed the chance to meet a better person. Taking into account the time and effort they put on the relationship — and thinking no one else would be too much different — they chose marriage over a breakup.

The couple reached the decision as their “sunk cost” was greater than their opportunity cost in economic terms.

Opportunity cost is the best possible value of the options given up among various choices, while the sunk cost is the cost that has already been invested and cannot be collected again. One may spoil work because of the sunk cost. The sunk cost fallacy is making an irrational choice because of previously invested resources.

A notable case is the Concorde fallacy of not admitting a wrong decision and continuing to justify it. The Concorde was the world’s first supersonic passenger airliner, and was developed by Britain and France. While it was not economically efficient, the two countries made enormous investments in the Concorde and continued to support the project out of the concern that their prides would be ruined and they would have to admit to their failure. After a crash in 2000 which killed all the passengers onboard, the Concorde ceased its operation in 2003.

Perhaps the Moon Jae-in administration’s focus on income-led growth reflects the Concorde fallacy. Former Blue House policy chief Jang Ha-sung said that the outcomes of the experimental economic policy would be visible this year. But the Korean economy actually grew by a negative 0.3 percent in the first quarter, the worst report card in 10 years since the global financial crisis.

While there are strong voices advocating modifying the direction of the government’s economic policies, there is no sign of changing the direction. Deputy Prime Minister for the Economy Hong Nam-ki only blamed external conditions and said the government will use all means available. Standing up for difficulties is not the only kind of courage: It takes greater courage to admit mistakes and failures and correct them. It is about time to cut the losses of this administration’s income-led growth policy.