KT’s new smart speaker will come with an 11.6-inch screen, the company said Monday at a press briefing in Gwanghwamun, central Seoul. 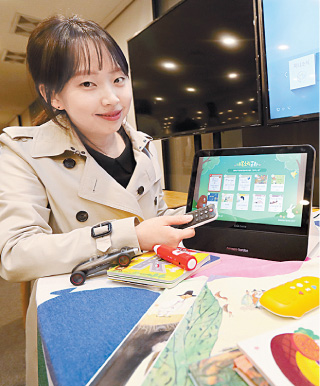 “It is a global trend to launch artificial intelligence-powered speakers with displays,” said Kim Chae-hee, a senior vice president of KT’s artificial intelligence (AI) business unit during the briefing. “The display allows active interaction between the speaker and users … as some users are not yet used to a voice-only interface.”

Kim said the competitive edge for KT’s new speaker is that it offers wireless internet protocol TV service. Unlike traditional TVs that work on fixed-line cable networks, the smart speaker allows users to watch IPTV content anywhere inside the house if there is Wi-Fi connection, KT said.

The carrier’s focus on the new smart speaker working like a small TV forced it to use a bigger display than on competing models, according to Kim.

The tablet, however, doesn’t work as a touchscreen. Users have to use voice commands or a separate remote control.

While it is the first KT smart speaker with a screen for general consumers, the company launched GiGA Genie with displays for hotels last year. That version understood English voice commands and also offered touchscreens. The new version for consumers doesn’t speak English.

Kim said the company analyzed usage data from hotels and found that most of the orders were made in voice commands.

“If we think a touchscreen is necessary we will consider adding it in our next version,” Kim said.

One special feature on KT’s new speaker is that it can read books to children using their parents’ voices. The carrier employed a so-called personalized-text-to-speech technology, which can use a person’s voice. Parents have to record their voices reading aloud 300 different sentences. That service, however, won’t be available to all purchasers of the smart speaker.

“The service calls for a lot of work from the company’s side so we will start by testing the service with a pool of 300 customers then offer the service to a wider public,” Choi said.