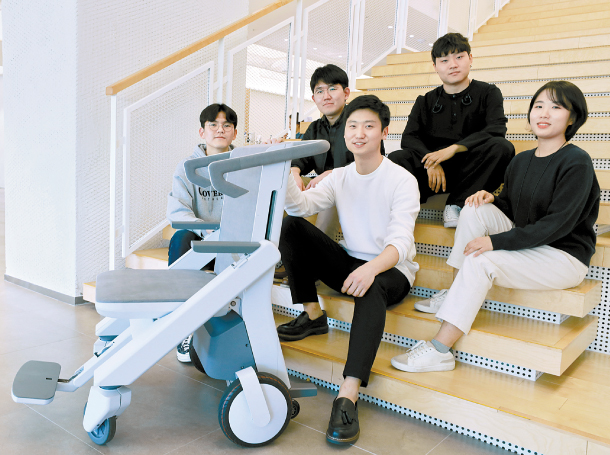 Wheelchairs are designed, quite rightly, for the person that has to sit in them. Naver Labs is taking things one step further, incorporating robotics technology into wheelchairs to make the experience as comfortable as possible both for the user, and for the person pushing them.

The AirCart Wheelchair comes with a number of features designed to make using it more comfortable for everyone involved. The handle contains sensors that detect how hard it is being pushed and amplify the force, its wheels absorb the impact from uneven surfaces and it has a small handle beside the chair that allows the person pushing to walk alongside the wheelchair user. The wheelchair can automatically fold itself for storage.

“After multiple tests of pushing and riding wheelchairs, we noticed that there was no sense of interaction at all between the person on it and the one pushing it,” said Kim Keun-wook in an interview with the Korea JoongAng Daily at the Naver Labs headquarters in Bundang District, Gyeonggi.

“Our solution was to make it look like walking while holding hands - which is a difficult task for anyone who uses a wheelchair. Starting from that idea of how it should look, we developed the functional aspects to make it happen.”

Kim was one of five undergraduate interns at Naver Labs that developed the AirCart Wheelchair as the result of a six-month internship program. The team - comprised of Kim Keun-wook, Kim Jae-hoon, Lee Ho-tae and Moon Jung-wook from Seoul National University and Kim Min-kyung of Korea Advanced Institute of Science & Technology (KAIST) - won second place in the student design competition awards with the AirCart Wheelchair at Human Robot Interaction 2019 last month, the largest annual conference in the field.

Four of them are engineering majors, while Kim studied design.

“While presenting and explaining about the wheelchair at our booth, we received a lot of feedback - the most popular question was whether we really made this on our own in six months,” said Lee.

The essential technology is based on Naver Labs’ existing AirCart.

From that basic form, the students added technological details: Instead of just amplifying power for going straight, they added sensors on the handle to do so for turns. The wheelchair was also made to move at a similar speed regardless of the degree of a slope and the user’s weight.

For example, the wheelchair could be pushed horizontally across a downwards slope, but the lower arm wouldn’t have to push harder to stop the wheelchair falling sideways down the hill - the robotics take care of that.

The side handle is another technological advancement. In a normal wheelchair, pushing from one side would just make the wheelchair tilt or turn away. The AirCart Wheelchair can continue to move straight when pushed this way.

All of these functions were at the top of the team’s list of tasks to solve after reviewing heaps of wheelchair-related reports and riding in wheelchairs over long distances and on various methods of public transportation.

And although they did seek practical tips from Naver Labs researchers, the core design and realization of ideas was predominantly done by the interns. Kim Jae-hoon and Kim Min-kyung were in charge of the architecture and manufacturing. Lee did the programing associated with the chair’s control while Moon oversaw the electricity circuits. Kim Keun-wook headed the overall research and product design.

Offering this level of autonomy and financial support for an intern project is rare in the engineering field, they said.

Naver Labs had received interns biannually five times before, but this team was the first to be selected with the goal of producing a real product prototype, not just research. Naver Labs CEO Seok Sang-ok, who picked the interns and the teams that came before them, said the selection process this time was a little different.

“We usually ask students about engineering fundamentals, but this time we picked candidates who voluntarily expressed a longing to build a robot that serves humanity and are interesting in doing good for people,” he said.

Seok, himself, is a robotics expert and was newly appointed to head Naver Labs, the company’s research division for future tech such as robots and automotive driving, last month.

“There are limits to what you can learn in school, and there are things that companies can teach better,” he said. “Students come here to learn from our staff, do projects and meet obstacles along the way. But the program is not aimed at attracting them to Naver Labs - I want them to study more with what they’ve experienced here.“

“During the five to seven years of their study, hopefully Naver Labs will grow to be bigger and better, good enough for them to think that we are their best option,” said Seok. “Even if they don’t join us, they’ll always be our ally - for ruling the world one day.”