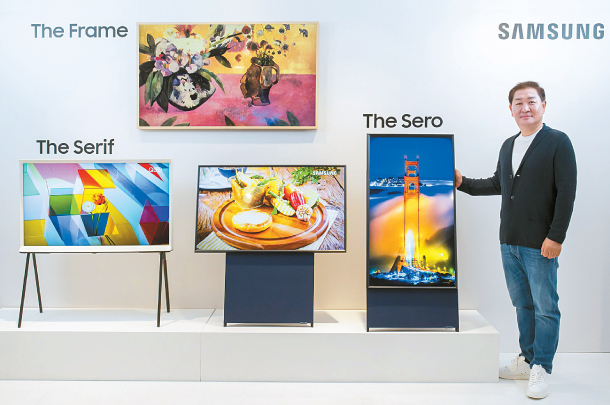 Han Jong-hee, head of the visual display business at Samsung Electronics, poses in front of a set of new televisions. [SAMSUNG ELECTRONICS]

Samsung Electronics will introduce a vertical television for younger viewers who are accustomed to watching content on vertical smartphone screens.

The Sero allows viewers to watch YouTube videos, shop online, play games and scan Instagram posts on its 43-inch vertical screen with enhanced audio, according to the firm. The television can also be rotated to a more traditional horizontal form.

“Television has a very different meaning to millennials than to the older generation,” said Han Jong-hee, head of visual display business at Samsung Electronics, at a media event held at a pop-up store in Sinsa-dong, southern Seoul, on Monday. “While watching television, millennials don’t just watch TV, but also chat with friends [via messaging apps] and surf the web. [Our new TV lineup] is a reflection of their lifestyle.”

Samsung opened the pop-up store to showcase its new televisions.

A smartphone can be connected to the television via screen mirroring, allowing the same things that are shown on the phone’s display to appear on the television screen. Mirroring works based on near field communication technology.

Viewers will be able to control the television using the artificial intelligence platform Bixby.

“Smartphone viewers have trouble watching content efficiently due to the small screen, another spokesperson from Samsung explained. “The small screen also makes it difficult to enjoy content for a long time, and is inconvenient when sharing it with others.”

When unused, users can put up a wallpaper image or a clock, making the TV part of the interior design, according to the company.

Millennials, who are primarily in their 20s and 30s now, are a major target for Samsung.

“Sixty-nine percent of Samsung television consumers are millennials, so their consumption pattern is very important to us,” said Han.

Samsung, however, answered vaguely when asked whether millennials would feel the need to watch content on a bigger, vertical screen, especially since they are used to watching short videos that run for a couple of minutes or less.

“People didn’t feel uncomfortable because there wasn’t such a device as The Sero. It is a basic consumer desire to want to watch content on a bigger screen,” said a Samsung spokesperson.

At the event, Samsung unveiled updated versions of its previous models like The Frame and The Serif. The first Serif, released in 2016, has a larger screen. The largest size for this model is 55 inches from the previous 40 inches. The Frame, which allows viewers to put up artwork on the screen when not using the TV, is now able to automatically adjust the coloring of the artwork depending on the level of brightness of the surrounding area. The largest size for this model is 65 inches. All three models are QLED televisions.

“Samsung will continue to bring out various [televisions] that reflect the needs and demands of millennials,” said Han.

The Frame and The Serif are currently available while The Sero will premiere in the Korean market in late May. The pop-up store will be open until June 2.