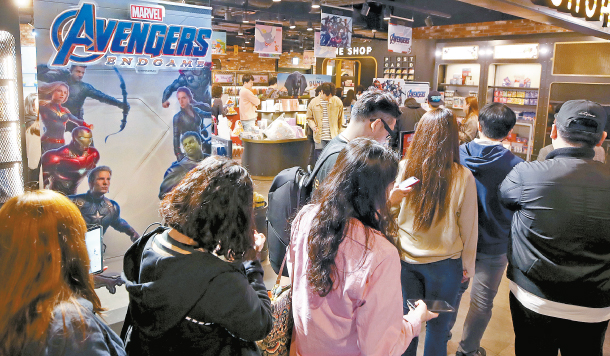 Marvel fans line up to buy Marvel goods in Seoul. The film sold over six million tickets in just six days since its premiere. [YONHAP]

The Republic of Korea has became the “Republic of Marvel” over the past week, as “Avengers: Endgame” easily wiped away every possible local box office record since its release on Wednesday. As of Monday, over six million moviegoers have watched the film, raking in over 37 billion won ($31.9 million) in ticket sales, according to the Korea Film Council.

“Endgame” was just as enormous overseas. The movie managed to take in $1.2 billion worldwide, giving it the biggest opening weekend in history.

Billed to feature the final epic battle between the Avengers and supervillain Thanos, moviegoers flocked to cinemas to see with their own eyes how the world’s mightiest heroes took on their powerful enemy.

One of the many reasons why the film set so many records was fans wanting to see the film before anyone spoiled it for them. All week, people have avoided social media and reviews so that they could go see the film without any prior knowledge of what was going to happen.

However, not everyone was able to avoid spoilers.

In response to the story, other users added comments, criticizing the boyfriend for “lacking empathy.” One person added, “When someone asks you not to spoil [a movie,] they mean it.”

While “Avengers: Endgame” dominated the local box office, it wasn’t the only option people had when they went to cinemas over the weekend.

Coming in at a distant second over the weekend at the local box office was the children’s feature “Pororo: Treasure Island Adventure.” The movie attracted 257,000 moviegoers at 736 screens. In the latest film about the adventurous penguin, Pororo and his friends are off to find treasure on a mysterious island before their enemies, Captain Black and his crew, do.

“Birthday,” last week’s box office winner, took the third spot as 31,000 tickets were sold at 410 screens. Made to console the grieving families who lost loved ones during the sinking of the Sewol ferry in 2014, the film has been praised for keeping their memories alive.

The film not only touched the hearts of Koreans but that of the international audience as well, as the film was selected to be the opening film of the 21st Far East Film Festival in Udine, Italy, which began on Friday.

It is currently the largest film festival in Europe for Asian films. “Birthday” drew empathy from Italians as the country experienced a similar boat tragedy in 2012, when the Italian cruise ship Costa Concordia was overturned after striking an underwater rock, resulting in 32 casualties. The festival runs until this Saturday.

“Captain Marvel” rose to the fourth place over the weekend, climbing up one rank from last week’s spot. The film sold 8,800 tickets at 66 screens.

“Avengers: Endgame” shattered the record for biggest opening weekend in North America with an estimated $350 million in ticket sales, reaching a new pinnacle in the blockbuster era that the comic-book studio has come to dominate.

The “Avengers” finale far exceeded even its own gargantuan expectations, according to studio estimates Sunday. The movie had been forecast to open between $260 million and $300 million in U.S. and Canadian theaters, but moviegoers turned out in such droves that “Endgame” blew past the previous record of $257.7 million, set last year by “Avengers: Infinity War” when it narrowly surpassed “Star Wars: The Force Awakens” ($248 million, or about $266 million in inflation adjusted dollars.)

Alan Horn, Disney chairman, credited Marvel Studios and its president, Kevin Feige, for challenging “notions of what is possible at the movie theater.”

“This weekend’s monumental success is a testament to the world they’ve envisioned, the talent involved, and their collective passion, matched by the irrepressible enthusiasm of fans around the world,” Horn said in a statement.

Further boosting the results for “Endgame” were good reviews; it currently ranks as 96 percent fresh on Rotten Tomatoes, the best rating for any Marvel movie aside from “Black Panther.” Audiences gave the film an A-plus on CinemaScore.