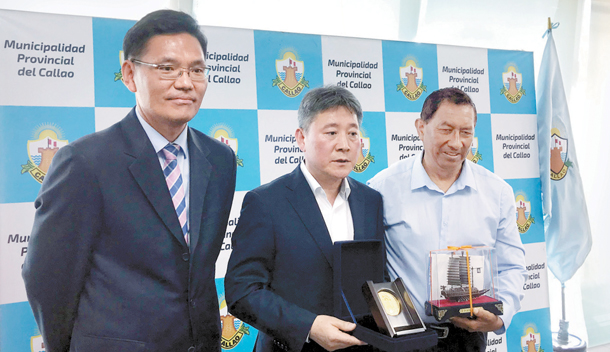 Ko Cheol-won, IFEZ’s smart city director, center, poses with Pedro Lopez Barrios, municipal mayor of the Callao District of Lima, Peru, and an official from the Embassy of the Republic of Korea in Peru. [Incheon Free Economic Zone]

The smart city model perfected at the Incheon Free Economic Zone (IFEZ) could soon be exported to Peru.

The IFEZ Authority announced on April 26 that it held a technical explanatory session and practical consultation with local experts from Peru, including representatives of the Callao District in Lima.

The talks, which focused on exporting the smart city concept and technology to Peru, were held between April 13 and April 20.

Piura, a city in northwestern Peru, is already preparing to move forward with a $10 million project and is now in a position to explore contracts with Korean companies later this year. The Piura project will give businesses connected to IFEZ an opportunity to expand their business overseas.

The “Smart City Platform,” the core software and hardware of a smart city, collects and processes various infrastructure facilities such as traffic, security, environment and energy by supporting the smart city’s connectivity.

Recently, six neighborhoods in Peru -the cities of Piura and Tacna, the Lima districts of Callao, Surco and La Victoria and Wanchaq District in Cusco - have been looking into importing the Korean smart city model to solve issues such as security and traffic.

Korea’s Committee on the Fourth Industrial Revolution; the Ministry of Land, Infrastructure and Transport; the Ministry of the Interior and Safety; and the Korea Trade-Investment Promotion Agency have been working together to support the first export of the IFEZ Smart City Platform to Peru.

If successful, the Peruvian version will open the door to further export opportunities.

Since August 2016, IFEZ has made various efforts with the Korean Embassy in Peru to promote the smart city model to the Peruvian central government, national legislator and local governments.

“The export of the smart city model will lead to a positive impact on the overall export of know-how on the operation of cities such as legal systems, governance, facilities and infrastructure management, security and environmental management,” said Kim Jin-yong, a commissioner of IFEZ. “We will do our best to cooperate with domestic institutions and companies to export the smart city technology overseas.”