South’s side of JSA opens to public Wednesday

South’s side of JSA opens to public Wednesday 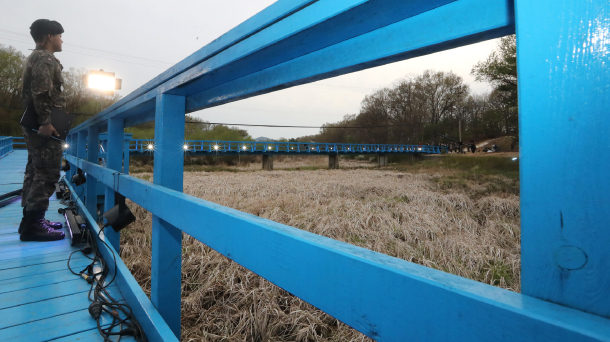 A soldier stands guard Saturday on the footbridge where South Korean President Moon Jae-in and North Korean leader Kim Jong-un walked while having a private chat at their first summit meeting on April 27 of last year. South Korea’s Defense Ministry announced on Monday that the southern side of the truce village of Panmunjom will open to the public on Wednesday as part of an inter-Korean military agreement signed in September. [YONHAP]

South Korea will open its side of the truce village of Panmunjom to the public on Wednesday as part of an inter-Korean military agreement signed in September, according to Seoul’s Defense Ministry on Monday.

But it is unclear when the agreement to allow free movement in all areas of Panmunjom, also known as the Joint Security Area (JSA), can be fulfilled in light of North Korea’s recent non-compliance and silence on the joint agreement.

The South’s Defense Ministry released a statement on Monday which announced that civilian tours of the JSA would resume starting on May 1.

“To fulfill the wishes of the people to visit Panmunjom around the first anniversary of the Panmunjom Agreement and to expedite tripartite talks on free movement in the area, the government has decided to open the southern side [of the JSA] to the public,” the statement read.

Last year, the two sides reached an agreement at the third inter-Korean summit in September to demilitarize the JSA so that tourists may be able to visit the venues at Panmunjom where South Korean President Moon Jae-in and North Korean leader Kim Jong-un met for the first time in April of last year.

By October, both sides began removing land mines within the JSA and dismantling their respective guard posts. Military personnel on patrol in the area were also reduced to less than 35 each and disarmed as per the agreement. Major elements of the deal were fully implemented by last December.

In the meantime, all tours of Panmunjom, which had previously been accessible to foreign and domestic visitors in the South upon appointment with government-sanctioned guides, were suspended as the two sides fulfilled their disarmament commitments.

As the most prominent symbol of Korea’s partition, the JSA was established as a neutral enclave in 1953 as a venue to supervise the implementation of the cease-fire of the 1950-53 Korean War. At the time of its creation, the approximately 800-meter- (875-yard-) wide circular area was open to free movement by both sides within its bounds.

All this changed in 1976, however, when two U.S. military officers were murdered by North Korean soldiers with axes. After the incident, which almost prompted a resumption of hostilities on the peninsula, a concrete military demarcation line (MDL) was erected in the JSA that effectively ended military cohabitation in the zone. This gave birth to the iconic image of military police from the two Koreas facing off with one another.

The military agreement last year sought to return the JSA to its original state, where personnel on each side were free to move around the area. This was part of a bid to reduce military tensions on the border and ultimately transform the roughly 250-kilometer- (155-mile-) long demilitarized zone - the heavily armed border between the two countries - into a peace park.

The two Koreas and the United Nations (UN) Command, which oversees the armistice agreement, are in the midst of negotiating the terms of free movement in the JSA, but differences in opinion over the limits of this free movement plan have reportedly delayed the talks. Pyongyang has yet to respond to a proposal on the matter drafted by the UN and South Korea. This is in line with its recent lack of communication with Seoul after the collapse of the U.S.-North Korea summit in Hanoi, Vietnam, in February.

Perhaps to build public support for its policy toward the North and to entice Pyongyang toward following through on its side of the bargain, Seoul has even expanded the venues at Panmunjom that will be available for tours to include a number of sites that featured prominently during the first Moon-Kim summit, like a footbridge where they had a private chat and trees planted by the two leaders in a symbolic ceremony.

Soldiers on patrol will also guide tourists to visit a newly-built guard post that the two Koreas agreed to jointly operate. The South’s Defense Ministry said it hoped these tours would help foster a peaceful atmosphere that could invite the North to open its own side to the public.