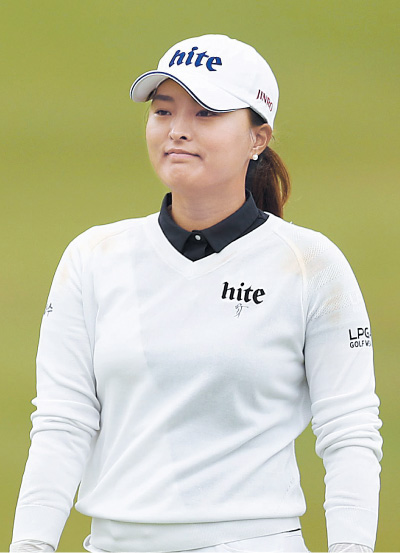 Ko Jin-young reacts during the final round of the Hugel-Air Premia LA Open at Wilshire Country Club in Los Angeles on April 28. [GETTY IMAGES/YONHAP]

Korean golfers may not be winning every tournament this season, but they are having another solid year in terms of the Rolex Women’s World Golf Rankings.

Minjee Lee of Australia moved up two spots to second after winning the Hugel-Air Premia LA Open on Sunday.

While there were minor changes within the top 10, there were much bigger changes between the 10th- and 20th-ranked golfers. Kim Sei-young, who finished runner-up at last week’s LA Open, jumped up eight spots, from 23rd to 15th.

Shin Ji-yai, who won a JLPGA Tour event on Sunday, moved up three spots to be ranked 18th. Shin, a former world No. 1 golfer in the women’s world ranking, gave up her LPGA Tour membership in 2014 and plays full-time on the JLPGA Tour.

Although she left the LPGA Tour, Shin has still managed to stay near the top of the world ranking. Since 2014, she has won a total of 18 tournaments on the JLPGA Tour.

Aside from Kim and Shin, 14th-ranked Amy Yang, 16th-ranked Ji Eun-hee and 20th-ranked Lee Jeong-eun were also ranked inside the top 20. Right outside of the top 20, Kim In-kyung is ranked 21st, having dropped two spots this week.

Although it’s not unusual to see Korean names in the top tiers of the women’s leaderboard, this year they are especially dominant.

Throughout the month of March, Park Sung-hyun maintained the top spot for four weeks, and throughout April, Ko held No. 1.

In terms of ranking by country, Korea is dominant as they are ranked first in terms of the number of golfers in the top 10, the top 100 and the top 500. Also, looking at wins this season, Korean golfers have won five of the 10 tournaments so far.

“Through the world ranking system, [golfers] get to compete at major tournaments and other benefits,” said Han Hee-won, a JTBC Golf commentator.

“So moving up spots motivates the players just as much as their LPGA standing.”

As one of the benefits of having a higher world ranking includes an opportunity to compete at the Olympics, it’s another strong motivation for the players.

This season is very similar to 2015. At the 2016 Rio Olympics, golf returned to the Games for the first time since 1904 and the qualifiers were determined according to world ranking a month before the Games.

A total of 60 players were qualified in each of the men’s and women’s events. Countries that had four golfers or more ranked inside the top 15 in the world ranking were allowed to have up to four players competing at the Games.

As for the remaining spots, they were distributed to the two highest-ranked golfers from countries that had not qualified.

Due to this, the qualification process in Korea was especially tough. From as early as a year before the deadline, Korean golfers were locked in a fierce competition against each other to boost their world rankings, and at one point in February 2016, six months before the Games, six Korean golfers were ranked inside the top 10.

As the Tokyo Games is fast approaching, Korea’s female golfers are once again gearing up to a competitive race in the world ranking. As they still have a year remaining until spots are finalized, anyone in the top 20 is a possible candidate and a lot of the golfers have mentioned that competing at the Tokyo Olympics is one of their goals.

But golfers can set the Olympics aside for now. This week, the LPGA Tour will continue its season in California as the players compete in the LPGA Mediheal Championship, starting today.

Ko and Park Sung-hyun will not be competing at this event.