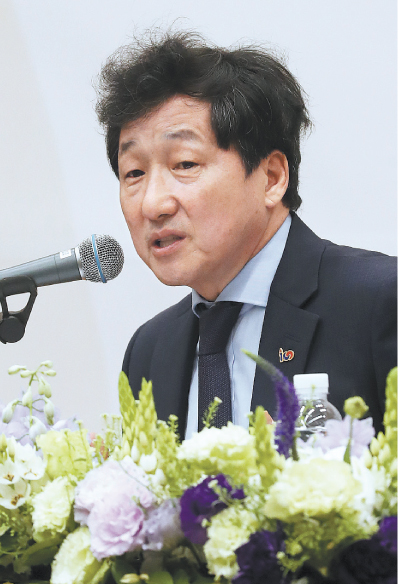 Yoo In-taek, president of the Seoul Arts Center, speaks at a briefing on Tuesday. [YONHAP]

The new president of the Seoul Arts Center, one of Korea’s most prestigious art complexes, promised to secure more government funding and stage more productions during his three-year term.

“During my office, I will raise the percentage of government funding to around 50 percent of the Seoul Arts Center’s annual budget from the current 25 percent,” said Yoo In-taek, who was sworn in as the head of the public institution in March, during his first press briefing as president on Tuesday.

According to Yoo, public funding for the Seoul Arts Center is much lower than similar institutions’ around the world. Sydney Opera House, London’s Barbican Center and the Opera National de Paris all get around 40 percent of their annual budget from the government, and even the Sejong Center for Performing Arts relies on public funds for 58.1 percent of the budget.

“I will also try to raise the number of people with Gold Memberships to 100,000 by the end of my term, using all the networks and connections I’ve built in the last 40 years,” he added.

When some reporters pointed out that Yoo seemed too occupied with financial issues rather than proposing plans to enrich future performances, he answered that money was essential to reviving the center.

“We need the money to reinvigorate shows,” Yoo said, adding that a lot of great venues are empty for months throughout the year.

Yoo has a colorful history in the arts industry, having invested in and produced projects ranging from small-scale theater shows to movies. More recently, he’s served as CEO of the Dongyang Arts Center and director of the Seoul Metropolitan Musical Theater.

“We must show the world that Korea has high quality arts, not just K-pop and K-drama,” Yoo added.