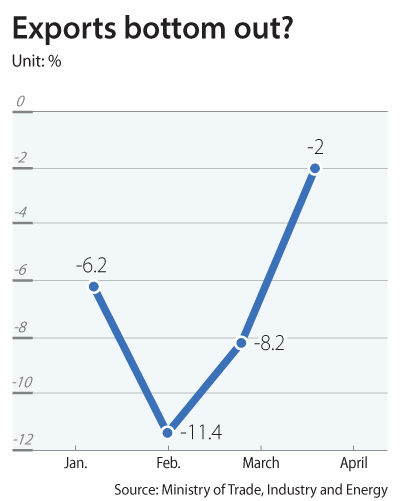 Exports continued to fall for the fifth consecutive month on weaknesses in computer chips and the Chinese economy.

According to the Ministry of Trade, Industry and Energy on Wednesday, exports in April fell 2 percent compared to a year ago to $48.9 billion. Exports have been falling each month since last December.

Imports, on the other hand, rose 2.4 percent last month to $44.7 billion, and the trade surplus was $4.1 billion, 33 percent smaller than a year earlier.

Korea has seen trade surpluses for 87 consecutive months, a record.

As in previous months, semiconductors and exports to China were the primary weaknesses in the export picture.

Semiconductors in April fell 13.5 percent to $8.4 billion. Semiconductors account for 17.3 percent of overall exports. The government blamed the falling unit price of computer chips. The price of an 8-gigabyte DRAM chip in April fell 52.2 percent compared to a year earlier, which was sharper than in February when it fell 37.5 percent. A 127-gigabyte NAND chip price was down 26.5 percent from a year earlier.

By region, exports to China continued to fall for the sixth consecutive month. In April, export to China fell 4.5 percent to $12.4 billion. China remains Korea’s largest export market. Semiconductors weren’t the only weakness. Petrochemical exports to China were down 16.7 percent, while machinery fell 10.8 percent and displays shrunk 12.1 percent.

“While semiconductor [exports] continued to struggle, other export items such as automobiles and ships found new export routes,” said Park Tae-sung, trade and investment director at the Ministry of Trade, Industry and Energy, adding that if semiconductors were excluded, overall exports saw a 0.8 percent increase.

“By region, when excluding China, exports shrunk 1.1 percent,” said Park. “Sluggish exports in semiconductors and to China were the major factors in April’s decline.”

The government, however, saw a silver lining in April’s exports report.

April’s exports drop was mild compared to the previous months. In February, exports fell 11.4 percent and in March 8.2 percent.

In fact, according to the government, exports in terms of volume rather than value, which were declining in the last couple of months, increased 2.5 percent in April.

“The reason exports shrunk is because the export unit price of several categories, including semiconductors and petrochemical products, were down and exports to China continued to remain sluggish,” the Trade Ministry’s Park said. “Thirteen out of 20 major export items, including automobiles and petroleum goods like refined oil, saw export volumes go up.”

Park said major industries like automobiles and shipbuilding, which have been struggling with restructuring, are showing signs of recovery.

In February, concerns rose after manufacturing output, investment and even consumption fell.

But in the latest report, which was released Tuesday, showed that while manufacturing output continued to fall, the pace slowed from February’s 3.4 percent to 2.8 percent in March.

Investment declines also eased from 26.8 percent to 15.5 percent in the same period while consumption turned around from a 1.8 percent decline to a 2.4 percent increase.

“When compared to February, production, consumption and investments all increased in March,” said Kim Bo-kyoung, Statistics Korea’s industry statistics director. “A significant increase in consumption and recovery in investment are positive signs.”