Music makes the sparks fly on ‘Studio Vibes’: The tvN reality show let stars be themselves, much to their delight

Music makes the sparks fly on ‘Studio Vibes’: The tvN reality show let stars be themselves, much to their delight

The cast of tvN’s “Studio Vibes” poses for photos at a press briefing Monday. [TVN]

There have been many dating shows in the past where young and attractive men and women were housed together under one roof, in the hopes that sparks would fly and relationships bloom.

All 10 cast members - five men and five women - are young musicians mostly in their 20s at different stages of their career. There are former boy band and girl group members, including Nam Tae-hyun formerly of YG Entertainment’s Winner, Chahee of the recently disbanded MelodyDay and Lee Woo, who used to be in boy band Madtown. Other participants are singer-songwriters Stella Jang, Eyedi, Jang Jane, Choi Nakta, vocalist Ko Sung-min, producer and D.J. Deepshower and rapper Bigone.

What makes “Studio Vibes,” which first aired yesterday, unique is that these musicians were left free to do whatever they wanted during the month it was filmed. Other dating programs - think “The Bachelor” - often give participants quests and deadlines to meet. 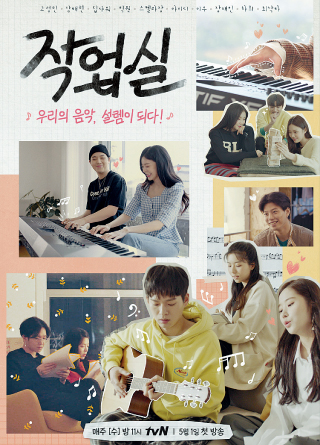 The poster for the series. [TVN]

The hope was that the musicians would create music together and find love in an unregulated environment. “Jakeobsil,” the name for the show in Korean, has a double meaning of being a place to work and a place to flirt.

It looks like things have already gone according to plan because one couple from the cast confirmed their relationship even before the show aired. Nam Tae-hyun and Jang Jane officially announced they were an item last week through their management agencies.

During a press briefing on Monday, the cast members admitted that they were surprised to have such few restrictions while filming.

“The staff didn’t even tell us what time to get up and I was really in my comfort zone,” said Stella Jang. “I know I shouldn’t have let myself go, but I did. There was one day when we just played with kinetic sand the whole night.”

“There were no missions, no orders and we didn’t even know where the cameras were,” said Nam Tae-hyun. “I think it was the first time showing who I truly am on television.”

Comedian Shin Dong-yup, one of the four panel members for “Studio Vibes” who provides commentary while watching footage of the cast, also agreed that the new series was different from the dating shows he’s seen or hosted before. The other panel members are Kim Hee-chul from Super Junior, JeA from Brown Eyed Girls and JooE from Momoland.

“‘Studio Vibes’ is probably the most ‘real’ reality dating show Korea has had so far,” said Shin.

“In the past, when reality programs were a huge hit abroad, they weren’t a success in Korea because the cast would hide their true feelings in fear of what others thought. But ‘Studio Vibes’ is totally different. The musicians don’t act like they’re in front of a camera - they express their emotions honestly.”

Producers used very strict criteria to cast each musician for the show.

“The first condition for choosing members was that they had to be honest,” said Kang Gung, one of the producers for the new show.

“We avoided artists who were under the strict control of their [management agencies]. Another condition was that the artist had to be living their own lives so that they would have stories to share.”

Although “Studio Vibes” is like other dating shows in that there is a lot of flirting, cast members agreed that the experience of living together with other artists helped them to grow musically.

Lee Woo, for example, said he brought a guitar with him to the “Studio Vibes” house, hoping that by the end of filming he would have mastered the basics of the instrument. Others chimed in that the show was a rare opportunity to collaborate with other artists from different genres.

For Deepshower and Chahee, the offer to join “Studio Vibes” came at a critical time when their lives were at crossroads.

“As you can see from the episodes, I was going through a really difficult time and I simply wanted to be with people,” said Deepshower. The producer can be seen getting emotional and tearing up in clips from the show.

Chahee was cast soon after her group disbanded and she was debating whether to stay in the industry.

“When I received the offer for the show, I thought a lot about it and eventually accepted because if I don’t challenge myself, I won’t have any more opportunities,” she said.

According to panel member Kim Hee-chul, viewers will have a good time watching “Studio Vibes” either by themselves or with their partners.

“It’s a good show to watch alone with a can of beer or as a couple,” he said. “I was actually jealous of the cast members and kept asking producers whether I could be in their place [instead of at the panel]. I think they were really energetic, bold and daring.”

Viewers can tune in to catch the exciting, musical love stories on tvN on Wednesdays at 11 p.m.