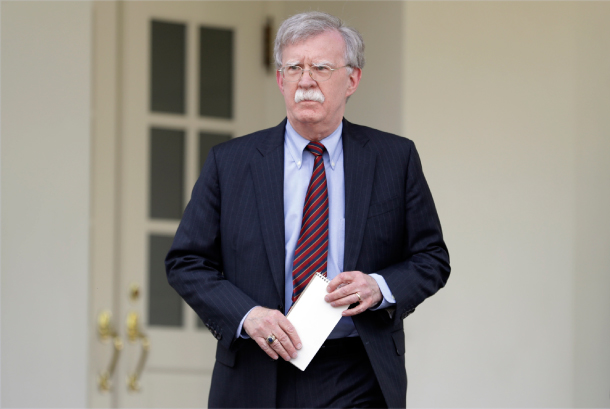 Citing unnamed U.S. government officials, the magazine said in its profile of Bolton published on Monday that Bolton privately told White House aides that the second U.S.-North summit in Hanoi, Vietnam, was unlikely to succeed.

Despite months of engagement with the North and Trump’s bragging about falling in “love” with North Korean leader Kim Jong-un, Bolton, according to the article, still believes that a strike is possible because the United States knows where most of North Korea’s nuclear weapons are.

“We can still do it,” a U.S. administration official cited Bolton as saying. “We know where most, if not all, of their weapons are. We could destroy their nuclear capability. There are ways to deal with their artillery.”

When asked about potential casualties, Bolton said he “wishes we weren’t at this point. But the military option remains viable.”

Other White House officials, on the other hand, are realizing that military force is not a realistic option, the source added.

“I think we could have destroyed the North’s nuclear program in the 1990s. It was more concentrated and we knew where everything was,” the official said. “Not anymore. It’s too big and too dispersed.”

In contrast to Bolton’s hawkish approach towards the North, Mike Pompeo, the U.S. secretary of state, said Tuesday during an interview with Fox News that he remains “hopeful” about Pyongyang’s denuclearization process and stressed Washington was prepared to resume dialogue.

“There’s only one real approach to denuclearization,” said Pompeo, “that’s to denuclearize, right, to begin to take down the threat.”

Pompeo went on, “We’re prepared to engage in conversations to arrive at a process by which the North Koreans can see their way clear to fulfilling the commitment that Chairman Kim made back in Singapore in June of last year.”

In the aftermath of the Hanoi summit in late February, Pyongyang has criticized both Bolton and Pompeo through its state media, blaming them for bringing talks to a dead end.

Late last month, North Korea’s Vice Foreign Minister Choe Son-hui called Bolton “dim-sighted” in a statement published by the Korean Central News Agency (KCNA), a remark that came in response to his interview with Bloomberg calling on Pyongyang to show a “real indication” it was ready to give up its nuclear weapons before a third summit takes place between their leaders.

In another statement issued by a North Korean Foreign Ministry official through the KCNA, the regime accused Pompeo of “letting loose reckless remarks and sophism of all kinds against us every day” and asked the United States to replace Pompeo with another negotiator who is “more careful and mature in communicating with us.”