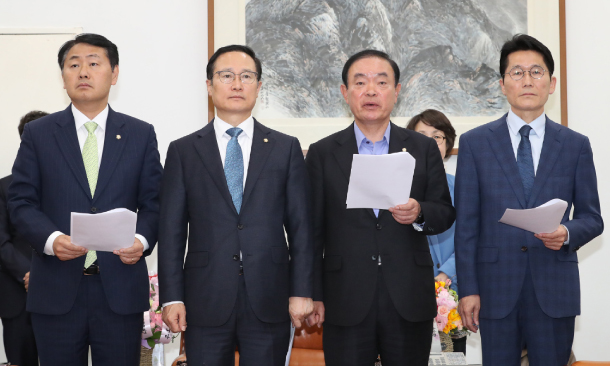 Floor leaders of the Bareunmirae Party, Democratic Party, Party for Democracy and Peace and Justice Party give a press briefing on Wednesday. [YONHAP]

Highly contentious bills on electoral reform and the establishment of an independent investigation agency were fast-tracked at the National Assembly late Monday by two special parliamentary committees.

After a week of bitter partisan fighting that, at times, turned physical, the ruling Democratic Party (DP) and three allied parties pushed the bills through two special parliamentary committees on political and judicial reform at around 11 p.m. in spite of vocal opposition by the main opposition Liberty Korea Party (LKP).

In the process, the heads of both committees had to exercise their rights to send bodyguards into the meetings to restore order after LKP lawmakers tried again to physically obstruct votes from taking place.

The bills included one on electoral reform, which would change the number of single-member districts and proportional representation seats in the legislature, and three on judicial reform, including a proposal to create a new agency to investigate corruption by high-ranking civil servants and another to adjust powers between the police and prosecutors.

Prosecutor General Moon Moo-il on Wednesday openly voiced his opposition to the judicial reform bills in a rare show of disagreement with policy issues.

“Law enforcement procedures must function in accordance to democratic principles,” Moon said, according to a release by the Supreme Prosecutors’ Office. “But the bills that were fast-tracked at the National Assembly currently go against the democratic principle of checks and balances.”

The top prosecutor’s direct jab at the bills may stem from the fact that they are fundamentally aimed at curbing the powers of prosecutors, who have long been regarded as having too much influence due to their indictment powers. One bill seeks to remove this power from regular prosecutors and bestow it on the new unit, which would also have the authority to indict prosecutors for corruption.

The endorsements by the two special committees on Monday ensure the bills will reach the floor for a general vote without being blocked by opposing lawmakers after a maximum of 330 days of review by relevant parliamentary bodies.

Given the highly sensitive nature of the bills, analysts say they are far from guaranteed to pass if there are changes to the political calculus of any of the four parties or its members in the run up to the next parliamentary elections in April 2020.

The bill on electoral reform, for example, necessitates that many rural districts with dwindling populations would be cut to make way for more party list seats, which could invite opposition from lawmakers in the DP or its ally, the Party for Democracy and Peace, which are almost entirely made up of lawmakers occupying such rural seats in the Jeolla region.

A last-minute compromise by the DP and its ally, the Bareunmirae Party (BP), on the agency bill could also be a problem among the allied parties going forward since the BP’s new proposal seeks to put even more checks on the agency. The BP proposal gives the right to appoint prosecutors within the new agency to the head of the unit, rather than the president as per the original bill, something several DP lawmakers have objected to.

On Tuesday, the LKP announced it would set up a makeshift headquarters in Gwanghwamun Square in central Seoul as part of a public campaign to stop the bills from becoming legislation. Arguing the fast-track process was “illegal and fundamentally invalid,” LKP floor leader Na Kyung-won told reporters that the party would visit all major cities around the country to stage protests against the bills.

This decision is believed to mirror a campaign strategy from 2004 led by former President Park Geun-hye who put a stop to all legislative activities by her Grand National Party - a precursor to the LKP - and moved its headquarters to a vacant lot in Yeouido, western Seoul, after a series of forecasts for the parliamentary elections that year that showed her party would lose by a landslide.

This plan ultimately proved successful for Park after her party won 121 seats and she earned a reputation as “the queen of elections,” but today’s LKP cannot afford to completely bow out of the National Assembly as there is still almost a year left until the next legislative races.

However, the Seoul Metropolitan Government turned down the LKP’s request Wednesday to set up its “tent headquarters” at Gwanghwamun Square, saying public space could not be leased for long-term use for political purposes as per municipal ordinance. On his personal Facebook page, Seoul Mayor Park Won-soon openly criticized the LKP’s plans to use the square for its aims, saying he would “never let them stomp on the square.”

Another burden the party faces by remaining on this path of maximum resistance is apparently growing public discontent. A petition on the Blue House website calling for the LKP’s dissolution garnered over 1.4 million signatures as of Wednesday - the largest since the creation of the public forum - fostered in part by the intense media focus on the violent scuffle that ensued at the legislature last week.

With the legislature effectively paralyzed as a result of the partisan strife, the DP and its three allied parties on Wednesday issued a public apology over the events at the National Assembly and again extended an offer to open dialogue with the LKP that afternoon to discuss a compromise on the bills as well as other pressing matters, like the approval of the government’s supplementary budget request. This was immediately rebuffed by the LKP, which called the four parties’ move to fast-track the bills a ploy aimed at next year’s elections.