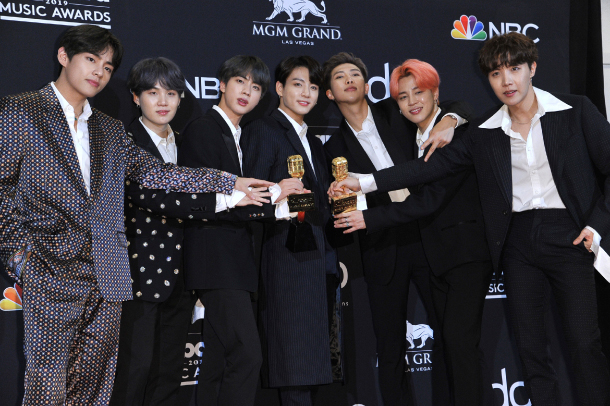 BTS was named Top Duo/Group for the first time and was given the Top Social Artist award for the third year in a row on Thursday at the Billboard Music Awards (BBMAs).

The annual BBMAs kicked off on Wednesday local time at the MGM Grand Garden Arena in Las Vegas. Local cable channel Mnet began a live broadcast of the event at 9 a.m. Korean time.

Thursday’s double win came after the success of the group’s 2018 EPs “Love Yourself: Tear” and “Love Yourself: Answer,” which topped not only local music charts but charts abroad as well, including Billboard’s.

In the Top Duo/Group category, BTS was nominated alongside big-name acts such as Imagine Dragons, Maroon 5, Panic! At The Disco and Dan + Shay.

For the Top Social Artist award, the group was nominated with K-pop group Exo, Ariana Grande and Louis Tomlinson.

“This means so much for us,” group leader RM said on the red carpet after BTS received the Top Social Artist award, which is the result of a popular vote by fans. “We’ll do our best today. That’s all we can do.”

While accepting the Top Duo/Group award, the group gave all the credit to its loyal fans, who are known as ARMY.

“Thank you, ARMY,” RM said. “[We] still can’t believe we’re here on this stage with so many great artists. ARMY, this is only possible because of the little things we shared together. The BTS and ARMY power, right?”

The group performed their latest hit “Boy With Luv” live with U.S. pop star Halsey for the first time at the awards show.

The group’s “Map of the Soul: Persona” EP, which was released on April 5, currently sits at No. 3 on the Billboard 200 albums chart, while “Boy With Luv” featuring Halsey is No. 40 on the Hot 100 songs chart.

The 2019 BBMAs honored artists who released work between March 23, 2018, and March 7, 2019, taking into account both physical and digital album sales, radio and TV appearances, digital streams of both songs and music videos, live performances and online social media activity.