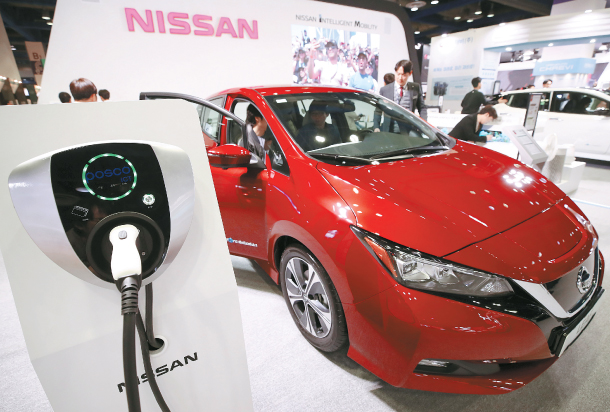 The electric motor show kicked off Thursday at Coex in southern Seoul. It hosts 419 exhibition booths, including those by Hyundai Motor, China’s BAIC Motor and Porsche.

Hyundai Motor unveiled the electric version of its eco-friendly Ioniq sedan for the first time at the auto show.

The new electric model has a driving range of 271 kilometers (168.4 miles), a 35.5 percent increase from the previous model thanks to its 38.3 kilowatt-hour lithium-ion polymer battery.

Meanwhile, Hyundai’s sister company Kia Motors is featuring its electric offerings such as the Soul Booster EV and the Niro EV.

China’s BAIC Motor also took to the stage on Thursday, unveiling three EV models, the first time a Chinese brand has done so in Korea.

The Beijing-based automaker introduced the EU5 mid-size sedan, EX5 mid-size SUV and EX3 small SUV at the show. BAIC plans to launch the models in Korea next year.

While Chinese brands have yet to make a significant impact in the Korean market, BAIC Motor said it is banking on its EVs.

“We will gradually introduce not only passenger EVs but also commercial vehicles to the Korean market,” said James Koh, BAIC Korea CEO.

The automaker will release its electric bus models as soon as it receives registration approval from the Ministry of Environment, which is expected to be completed this month.

Meanwhile, Porsche is showcasing its Mission E concept car for the first time in Korea. The concept will be launched as a production model called Taycan, which is expected to go on sale next year.

The working performance EV concept has a driving range of 500 kilometers and boasts up to 600 horsepower. The Germany-based performance brand said through its charging system, the concept’s battery can be charged to 80 percent of its capacity in 15 minutes.

The company announced Thursday that it will work with Daegu-based EV charger company Daeyoung Chaevi to roll out charging infrastructure in Korea for its EVs in the future.

Porsche is also exhibiting its hybrid models such as the Cayenne E-Hybrid and the Panamera 4 E-Hybrid.

The automaker has previously said it will invest 6 billion euros ($6.7 billion) to develop EVs by 2022.

The auto show also features a string of electric motorcycle makers such as MBI. Headquartered in Cheongju, North Chungcheong, the company is featuring its motorcycles which have a driving range of 110 kilometers.

Besides the exhibitions, the four-day auto show also offers visitors test drives in electric cars such as Kia’s Soul and Nissan’s Leaf.