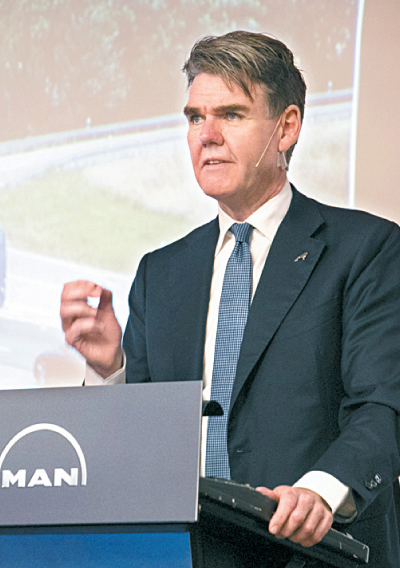 MAN Truck & Bus will offer seven-year or one-million-kilometer (621,371-mile) warranties on its vehicles with faulty cooling hoses in a bid to regain the trust of Korean consumers.

During a press conference hosted by the Korean unit of MAN at Grand Intercontinental Hotel in southern Seoul on Thursday, three top MAN executives apologized for problems with its vehicles and outlined the company’s future strategy in Korea.

The event was attended by CEO Joachim Drees, Goran Nyberg, executive board member for sales & marketing, and Max Burger, CEO of the commercial automaker’s Korean unit.

“I want to apologize truly for the cost and inconvenience that some of our customers have been facing,” Drees said. “Korea is one of our seven focus markets, and with a long-term perspective, we will continue to invest in this country.”

The Korean subsidiary of the German automaker faced a problem last year after multiple owners of its trucks complained about faulty cooling hoses. Some also reported rusting engines and transmissions that shifted into neutral on their own.

“We are about 30 to 40 percent and up to 90 percent finished with recalls depending on the models,” Burger said, adding that some of the lawsuits were withdrawn.

MAN is offering a new warranty to owners for vehicles with the faulty cooling hoses and Euro 6 engines that are signed up for additional maintenance packages.

Unwanted gear shifting and rusting engines are not included in the program, as owners who made those complaints did not actively request them from MAN.