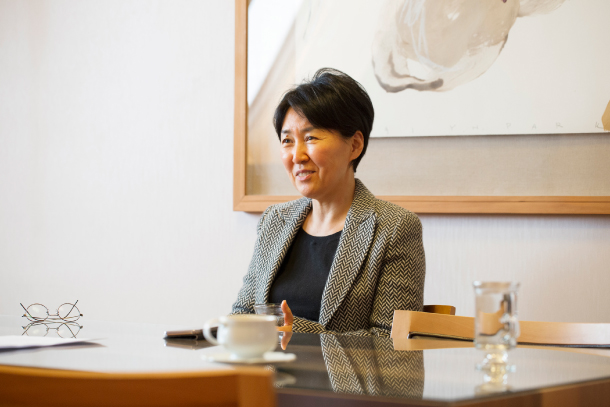 Jung Hye-shin, Psychiatrist and author of the book “You Are Right.” [LIM ANNA]

Jung Hye-shin, a 56-year-old psychiatrist, is called a doctor of the streets. She left her doctor’s office 15 years ago and has helped victims of governmental violence and the bereaved families of the Sewol ferry tragedy. Ever since she published a book called “You Are Right” last October that made the term “psychological cardiopulmonary resuscitation [CPR]” known, she has been healing regular people. She has opened over 100 workshops in small book stores and libraries and offered consultations.

According to Jung, after the financial crisis in 1997 and the Sewol ferry tragedy, people lost trust toward a world they found unpredictable, and identified themselves as victims. She also added that even if people find success, this is mostly the result of self-repression. As such, there is a psychological cost to be paid after success. She emphasized that just by saying, “Oh, I see, you must have felt that way,” you can fill a person’s void, allow that person to make reasonable decisions and even save that person’s life.

The JoongAng Ilbo met with Jung at the OCI Museum of Art in central Seoul. Below are edited excerpts from the interview.

Q. Who participate in the workshops?

A. Women outnumber men by seven to three. By occupation, many teachers come. They confess how they feel powerless in school. There was even a teenager who convinced their parents to come and brought them to the workshop.

What do participants complain of?

Every human’s pain is individual, yet most people seem to be in a situation where it is hard to feel that you are an individual. For instance, in the workplace, people are treated like components, such as air conditioners or computers. The individual “me” is gone. It is the extinction of the being. Nobody pays attention to me and is indifferent about what I am thinking. If people live in a place surrounded by that type of attention, and that type of social atmosphere is there for long time, they tend to view themselves in a similar way.

“I am an adult, firstborn son, head of the company, so I’m not supposed to be here [wallowing in self-pity].”

They think to themselves like that, but they live their lives without knowing the reason why they are sick, lonely, anxious and gloomy.

Is Korean society at a point where psychological CPR is necessary in our daily lives?

This is a story that I already wrote about in my book, which is that everybody admires the owner of a big corporation or the office worker who became a CEO or executives, politicians or lawyers [in general]. It is natural that they have to be happy, but that is not always true. This is not an exaggeration. The amount of pain someone experiences is equal in our society. Regardless of social class, everybody goes through pain. Other countries are the same, but in Korea it seems to be extremely serious. I think it is because social success in our society is mostly a result of self-repression. The psychological price they endured while being successful is paid for after they succeed.

Historically, is it true? Is this pain getting worse as time goes by?

The pain felt during the Korean War was different. I believe that the Asian financial crisis in 1997 traumatized and carved a deep internal injury in our society as much as the Korean War did. It broke our thinking and feelings of predictability and trust toward the world. Financially, we say that we overcame the crisis, but psychologically I believe we are still suffering. Neither an organization nor a person in the world will take care of me, so the sentiment that one must survive in this world by oneself has become widespread. People identify themselves as victims and live by hurting others. The Sewol ferry tragedy was like a second trauma on top of that and a confirmation of the pain.

There are countless problems that are unsolvable through psychological CPR, like youth unemployment.

A person’s mind is not considered stable just because they earn a lot of money. Without the feeling of being respected or taken care of, it is like shoveling sand against the tide, although the person is satisfied physically. It is because the emotional part is the core and substance of existence.

I have seen so many [who were unfulfilled]. It also applies to young men who hate feminism. They experienced discrimination against women and are in a predicament.

It is not right to enlighten these people by educating them on the importance of female rights. Every action has its reasons. For people who feel victimized, we need to say, “I understand you,” to them.

“You were angry because of that.”

Then the hatred and anger naturally dissipates. The old nationalists who march the streets with the Korean flag need the same prescription.

Understanding another’s emotion and acknowledging it is not as easy as it sounds.

People need to be curious of a person’s mind, feelings and emotions. When people carry out CPR, they even take off people’s clothes and apply force right in the middle of the heart as accurately as possible and massage it until the heartbeat comes back. People need to also sympathize with other people’s feelings and emotions as precisely as possible.

When we share that we are interested in how another person feels, and that person confides in us accordingly, does this process heal the person?

“My husband is really interested in how I feel.”

This feeling alone is very helpful for the wife. If we ask our spouse how they feel these days, I am pretty sure that they would be embarrassed. It is because they have never thought about it at all. If a spouse says that it is always the same and then goes into a room think to themselves about how they feel, communication has already, to some extent, been accomplished.

If a few days later your spouse said, “I thought about it since you asked me, and actually I want to quit everything these days and I want to move somewhere far away,” the interaction between you two truly begins from that point.

You might not ask for fear that the spouse could talk about something out-of-hand, but the key to healing is not a prescription from an expert but just merely saying, “Oh, I see, you felt like that at that time.”

Even if a person says that he wanted to kill someone, saying, “Oh, I see, you even went as far as to think like that,” is enough.
If a person vented her feelings and emotions, which are at the center of existence, and another accepts it as it is, this is saving one’s life. If one’s being is embraced as they are, the person begins to be filled up psychologically at a rapid pace, almost like a psychological warehouse is being filled.

A person can only make the most reasonable decision in a relaxed manner. This is the power of empathy, and the gist of my argument in the book, “You Are Right.”

If you know this principle, I am confident that we can reduce the unnecessary energy wasted in our society.

Saying a human is kind or not kind is also judging others. Before judging someone, everyone is right [in their own way].

Unpardonable and evil emotions all have reasons, too. If you see those kinds of people with that perspective, they will return. I have not seen exceptions yet.

When is it hard to understand someone?

Former President Park Geun-hye says that she feels tight right now. I believe that there is a reason for that. She was victimized for her entire life.

Nobody recognized that, so she controlled those feelings alone throughout her life and became president, and in the process, side effects emerged.

When I consult victims of torture in the 1970s to 1980s, they blame Kim Ki-choon, former President Park’s chief of staff, but I think if he committed many misdeeds, he has his reasons.

I don’t believe there is anyone who cannot be healed.