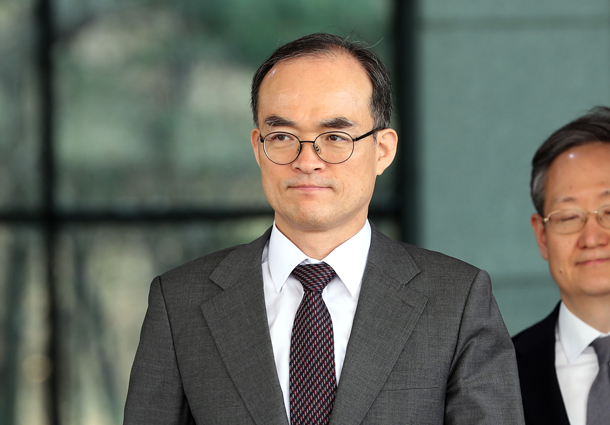 Prosecutor General Moon Moo-il decided Thursday to cut an overseas business trip short to return to Korea on Saturday and respond to lawmakers’ fast-tracking of bills to reform the criminal justice system.

The Supreme Prosecutors’ Office said Thursday that Moon canceled a planned visit to Ecuador and will return to Korea. Moon has been on an overseas trip to sign judicial cooperation agreements with several countries since Sunday. He visited Oman, Uzbekistan and is currently in Kyrgyzstan.

Some prosecutors said Moon must fight the reform plan by threatening his resignation. Moon’s tenure runs until July.

In June 2004, then-Prosecutor General Song Kwang-soo successfully fought the Justice Ministry and ruling party’s campaign to shut down the central investigation unit of the Supreme Prosecutors’ Office by threatening his resignation. At the time, Song said the government must “behead” him first to introduce the changes.

When the prosecution faced a similar reform attempt in 2011, then-Prosecutor General Kim Joon-gyu expressed his intention to step down in protest with 46 days remaining in his term. Kim did so while then-President Lee Myung-bak was out of the country, an unprecedented confrontation against the Blue House.

Moon already voiced his opposition to the judicial reform bills on Wednesday. In a statement, the top prosecutor said the fast-tracked bills “go against the democratic principle of check and balances.”

He particularly complained that the bills are awarding exclusive powers - a combination of primary investigation rights without supervision and intelligence authority - to the police. He said he could not accept the direction of the current reform proposal.

The top prosecutor had already resisted the reform initiative. He met with President Moon Jae-in on June 15, 2018, to express his concerns about the plan.

At the time, the Blue House said the prosecutor general had “extremely candidly” expressed his concerns to the president, and the president told him that it was necessary for the police to have more autonomy in investigations, while the prosecutors, who have indictment power, should control the police probes afterward if supplements are necessary.

The Blue House, which pushed the reform measures designed to curb the prosecution’s powers, remained silent about the top prosecutor’s public disagreement with a presidential initiative. No official comment was issued Thursday.

Prosecutors have worried that the bills are designed to curb their powers. One bill seeks to divide the prosecution’s exclusive indictment power and bestow it on a new agency investigating senior public servants.

The new agency will have powers to investigate and indict prosecutors for corruption.

Prosecutors also worry that the police will have too much power based on their right to collect domestic intelligence.

“The National Intelligence Service’s domestic operations were shut down, so the police have the exclusive authority to collect domestic information,” said an official from the Supreme Prosecutors’ Office. “The bill on redistributing investigative powers between the prosecution and the police does not contain any plans to disperse the police powers.

“If the bills are passed as they are, the police will have absolute power, and the prosecutor general was worrying about this,” he said.

The police maintain prosecutors can control investigations by demanding additional probes and exercising its rights to demand disciplinary actions against police.

The National Police Agency issued a press release on Thursday and said it is designing a meticulous plan for investigation steps.

“If the police decide to drop a case, a relevant person in the case can file an objection, according to the bill,” said a senior police official in charge of investigation reform. “Then, the case will be handed over to the prosecution. The prosecution’s argument that the police can drop cases on its own discretion is not true.”

Lee Woong-hyuk, a professor at the department of police science at Konkuk University, agrees that the prosecution is going too far to demand that the police need to separate intelligence gathering and investigations. “It is the police’s duty to collect information regarding public order and conduct an investigation,” said Lee.

“The prosecution is demanding that they be separated, and it is hard to understand this. There are no police in the world who separately carry out intelligence gathering and investigations.”