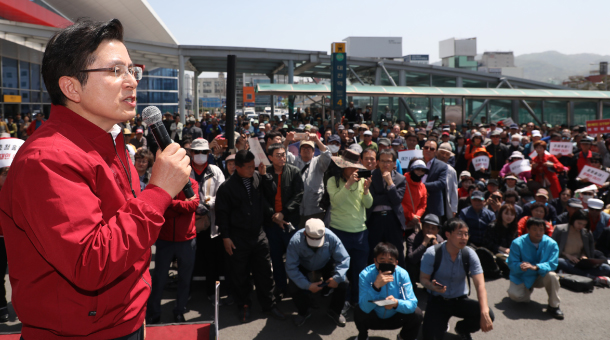 Hwang Kyo-ahn, left, chairman of the Liberty Korea Party, delivers a speech criticizing the Moon Jae-in government for fast-tracking contentious bills in front of a throng of people at Daejeon Station on Thursday. [NEWS1]

An independent commission probing two recent deadly tragedies will investigate whether Hwang Kyo-ahn, leader of the main opposition party, obstructed an earlier probe into the Sewol ferry’s sinking in 2014 when he was justice minister for the previous administration.

The Liberty Korea Party (LKP) and its chairman criticized the plan as an attempt to politicize the tragedy, stressing that Hwang was already investigated and cleared for obstruction of justice charges in the past.

The Special Investigation Commission on the Humidifier Disinfectant Disaster and the April 16, 2014, Sewol Ferry Disaster held a meeting Tuesday and approved a plan to add a new charge to its probe into the Sewol’s sinking. A group of victims’ relatives asked the commission on April 1 to investigate Hwang, who was justice minister for the Park Geun-hye administration at the time of the tragedy, on charges of obstructing and influencing an earlier probe.

“We decided there were no grounds to dismiss their request [to probe Hwang],” said a commission official. “So we approved a probe. This is not a new charge, so it is possible that the case will be integrated into our investigation of the appropriateness of the government’s response to the incident.”

The commission has no authority to compel Hwang to submit to a questioning. Hwang said it is absurd for the commission to question him on those charges.

The LKP also condemned the commission’s decision. “Over the past years, attempts to attack Hwang were made by accusing him for having obstructed an earlier probe into the Sewol ferry’s sinking, but he was cleared of all charges,” said Rep. Jun Hee-kyung, spokeswoman of the LKP. “We cannot tolerate the attempt to politicize the tragedy.”

The commission was launched in March 2018 based on the Special Act on Investigating the Truth of Social Disasters and Building a Safe Society, which passed the National Assembly in November 2017.

The commission has two sub-commissions, one dedicated to the toxic humidifier scandal, which killed over 1,400 and sickened over 4,800, and another to the Sewol ferry’s sinking, in which 299 died and five remain missing. The second sub-commission took over the role of an earlier special investigation committee on the ferry disaster, which was dismantled in September 2016.

Last December, the commission used its independent power to probe the direct cause of the sinking and initial countermeasures. The appropriateness of the government’s responses, the rescue operation and a suspected cover-up by intelligence authorities were also to be investigated.

The commission is focusing its probe in particular on the Maritime Police Agency’s response to the sinking. It is also investigating why a broadcast aboard the ship was made at the time of the accident that passengers must remain inside, rather than an evacuation order. It is also looking into the Blue House’s responses to the accident.

The commission was supposed to operate until the end of this year, but extended last month its mandate by another year. The commission has no power to forcibly conduct an investigation. It has the right to request a person who is deemed to have material evidence or information to submit to questioning. If the person refuses at least twice without just cause, the commission may issue a summons to appear for questioning. If the person does not respond, a fine of up to 30 million won ($25,770) can be levied.