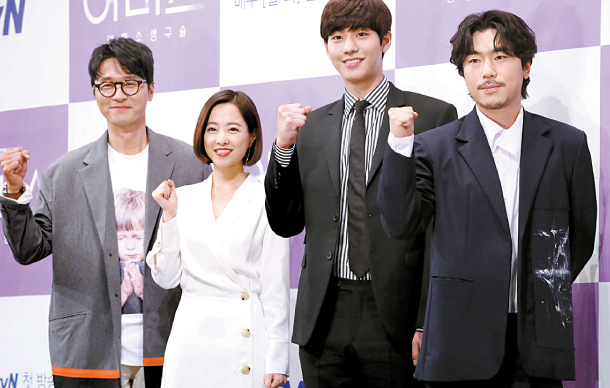 Actors Park Bo-young and Ahn Hyo-seop will play the protagonists in the upcoming tvN drama series “Abyss,” which premieres on May 6.

The story is about two friends leading completely different lives: Cha Min (Ahn) is next in line to be the CEO of a cosmetic conglomerate, but everyone stares at him because he is “ugly.” Meanwhile, Se-yeon (Park) was born beautiful, smart and works as a professional attorney, striving to be a member of the elite.

The two have been friends for 20 years and know everything about each other. After both friends tragically die in accidents, they are revived - but their looks have completely changed.

When the two friends finally recognize each other, they come to realize that their deaths were no “accident” and try to find the missing link to solve the mystery.

“Many genres are mixed together in this show - comedy, romance, and thriller. That’s what inspired me [to direct this series]” said director Yoo Je-won, who has also directed popular tvN drama series “High School King of Savvy” (2014) and “Oh My Ghost” (2015).

This show is Park’s first TV show since her 2017 role in JTBC “Strong Girl Bong-soon.” When asked about her second collaboration with director Yoo, Park said that not much was different except for the fact that she could catch on to what Yoo wanted her to depict more quickly. “Moreover, the script itself was a page-turner, I was so curious to find out what happened next, which is more the reason why I was excited to be part of this cast.”

“The mixture of all these different genres is what makes the plot so unique,” Yoo said.