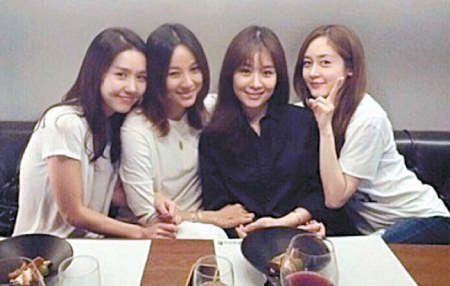 Fin.K.L fans breathed a sigh of relief after it was announced on Friday that the group’s four members are finally coming back together for a new television program set to air on JTBC.

The television network announced that producers behind the hit shows “Hyori’s Homestay” and “Girl Spirit” will come together to make the upcoming show along with the girl group, but the content of the show and its premiere date has yet to be revealed.

Lee Hyo-ri, Sung Yu-ri, Lee Jin and Ock Joo-hyun debuted as Fin.K.L in 1998 and topped the charts for many years. After their last album “Forever Fin.K.L” was released in 2005, the members went their separate ways. Although fans have pleaded for the group to reunite for many years, their wishes have thus far failed to come true, despite posts on social media and appearances on television showing that the girls have kept in touch.

Before the official announcement was made on Friday, Ock and Sung made posts hinting about the new program on each of their fan club websites. Ock wrote, “I want to make this May special. I think this opportunity has been given to us due to many, many wishes and hopes [from the fans].”

Sung wrote, “There were many changes [that have happened to the four of us] but there’s always been a special place in my mind that cherishes our unforgettable memories.”