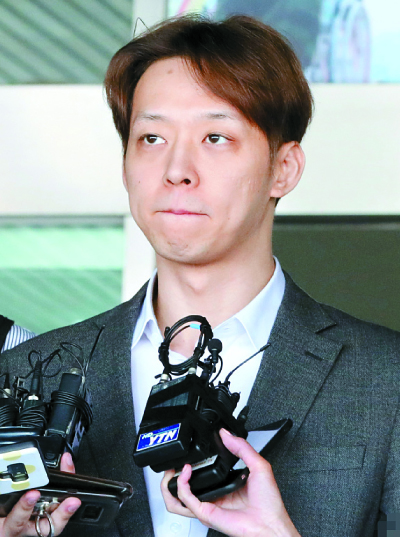 The 33-year-old Park confessed to the alleged drug use on Monday as he faces allegations that he took drugs together with the granddaughter of the founder of a dairy producer.

His confession came after holding a press conference last month to flatly deny his allegations.

“I apologized to many people for lying [about the allegations]. I’ll take punishment and will live my life in regret,” Park told reporters when he came out of the police station.

Earlier in the day, police referred the case to the prosecution.

Park is accused of having purchased 1.5 grams of methamphetamine earlier this year and used the drugs together with Hwang Ha-na, the arrested granddaughter of the founder and honorary chairman of Namyang Dairy Products, six times.

He is suspected of having used methamphetamine alone last summer at his home in southern Seoul, according to police.

In 2017, Park announced plans to marry Hwang after dating her since 2016, but he later called off the marriage and broke up with her in 2018.

A local court issued an arrest warrant for Park last Friday, citing a risk of flight and destruction of evidence.

A sample of Park’s body hair obtained in a police raid on his house earlier this month tested positive for methamphetamine, a banned substance in Korea, in a national forensic agency drug test.

Park’s alleged drug use was highlighted after the 31-year-old Hwang was arrested on April 6 on charges of buying methamphetamine and using it in 2015. She confessed to police that an entertainment star was behind her drug use.

Police earlier obtained CCTV footage showing Park picking up something about 20-30 minutes after probably sending money to a bank account suspected to belong to a drug dealer via an ATM in Seoul.

He told police he sent the money at the request of Hwang but claimed he did not use drugs.