A man wearing a Korean unification flag on his chest waited for the start of the London Marathon at Greenwich Park in eastern London on April 28.

Na Yang-il, 51, wore a T-shirt featuring the Korean Peninsula in blue when he ran the marathon. On the shirt, two handwritten statements were written: “No war here” and “united Korea.”

Na immigrated to Canada in 2006 and started running marathons as a hobby. In 2012, he completed his first full 42.195-kilometer (26.219-mile) marathon. After going through intense training, Na began participating in well-known marathons, including the Boston Marathon in 2017. 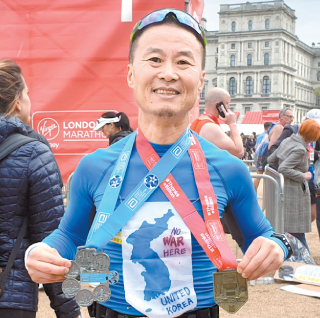 “I participated in the New York City Marathon in November 2017, a time when there was talk about a nuclear button between North Korea and the United States,” said Na. “Living overseas, I thought a war was about to break out any moment in the Korean Peninsula. That’s why I wore the Korean unification flag: to spread the message on anti-war, establishing peace and unification to people around the world.”
Na also wore the flag when he participated in the 2018 Tokyo Marathon in February last year and the 2018 Boston Marathon in September. The following year, he visited Seoul to participate in a marathon on March 1 that celebrated the 100th anniversary of the March 1, 1919 Independence Movement and the establishment of Korea’s provisional government in Shanghai in the same year.

Na participated in North Korea’s Pyongyang marathon on April 7 through a travel agency in Beijing. It was the first time that Na stepped on North Korean soil.

“I heard that unification needs the help of South and North Koreans and all the overseas Koreans around the world,” said Na. “If given the opportunity, I always wanted a chance to participate in a marathon held in North Korea.”

Na said that North Korea was different than he had expected.

“People’s expressions were lively and I could see how much the country had grown,” he said.

“After I completed the marathon and returned to the stadium, I spread a Korean unification flag and ran around the stadium,” said Na. “I will never forget the emotion that I felt when some 50,000 people in Pyongyang stood up applauding.”

“Unification is not something discussed solely by leaders of the North and South or politicians,” said Na. “I am expressing [my desire for unification] through marathons, which I love, and I think the two Koreas can be united with people from various fields coming in contact with each other and people paying attention to the situation. The North Korean nuclear issue seems to be improving little by little, so I look forward to a positive outcome.”