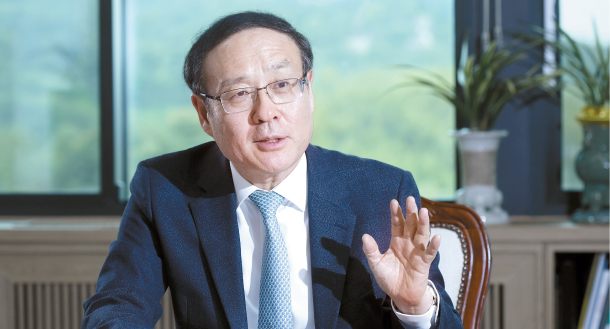 Oh Se-jung, 65, president of Seoul National University (SNU), plans to push the school to a new standard of excellence by making it a leading university in the QS World University Rankings in 10 fields of study.

As a graduate of SNU himself, Oh wanted to change recent public outcry against the university that criticized SNU for not doing enough for society when compared to the government subsidies it receives.

“When I was working for the National Assembly, looking in the eyes of ordinary citizens, I thought Seoul National University shouldn’t keep doing what it has been doing,” said Oh. “People used to think they should support the school since it is Korea’s main university, but these days, people question the school, asking what it has done after receiving that much support [from the government].”

Oh’s will to change SNU was strong enough to give up his seat at the National Assembly even before he was guaranteed his position as president of the university. After applying for the position for the third time, he was inaugurated as president of SNU on Feb. 1.

Oh was always at the top of his class since elementary school. He graduated from Kyunggi High School and studied physics at Seoul National University. He continued his studies by doing his doctorate degree at Stanford University and then became a researcher at the Xerox Palo Alto Research Center in California. He then taught physics at SNU while being part of several advisory committees for the president. He became president of the Institute for Basic Science in 2011 and became a lawmaker of the National Assembly in 2016.

The JoongAng Sunday conducted an interview with Oh on April 23 at his office on Seoul National University’s main campus in Gwanak District, southern Seoul.

Q. For a moment, people were saying that SNU should be shut down.

A. The biggest reason for that was because SNU is at the top [of college rankings in Korea]. People said the ranking system was why middle and high school education is not working out, and SNU, which is at the top of the system, is to blame. However, the problem won’t disappear even if SNU is shut down. Looking back, I don’t think SNU clearly showed its worth to society.

What are your plans to make changes to the school?

A sense of community needs to be revived within the school. Any society needs intellectual elites or specialized organizations in order to advance. SNU needs to identify national problems and offer a solution. It is the same for entrance examination for universities. Keeping SNU at the top by admitting students earlier than other schools is not important. We need to think about a kind of entrance examination that can normalize the educational system, especially for middle and high school students.

Are you planning on changing how students are accepted to the university?

The Ministry of Education strictly regulates the entrance examination for universities. There are things we can change to the system, but if changes are made to the entrance exam suddenly, it will only make people rely on private education. We need to change the system slowly so that people can foresee the changes. We plan to create a committee for education to review what kind of students SNU accepts and how it will nurture them in the long-term.

SNU has accepted an average of 20.4 percent of its students through regular admission. The Ministry of Education is demanding the school raise this number to 30 percent. How do you feel about this?

I understand [why they are demanding the number of accepted students be raised to 30 percent for regular admissions]. However, I do not think that is the solution to solving [the imbalance in the educational system]. Regular admissions examinations consist of students solving multiple-choice questions. People with exceptional memory are bound to be at an advantage. However, we do not need that kind of talent. We need students that are creative enough to think up of new things, and we doubt that these students can be admitted through the current college entrance exam. That is why we admitted a lot of students through screening transcripts of students’ school records, but the problem comes from people not confiding in the system. In the short run, we plan to help the public understand this system and include outsiders to the college board so that we can guarantee the board will be fair and trustworthy.

Some people see SNU graduates as self-centered. What kind of people do you want to nurture at SNU?

This is part of the sense of community that I mentioned earlier. There is a high possibility that SNU graduates will become leaders in society. A leader that goes together with others is more important than a leader who demands that people follow without asking any questions. In the fourth industrial revolution, instead of using knowledge that is already known to us, it will be important to think of new things that are different than that of others. Instead of people with a lot of knowledge, people who ask a lot of questions are the people we need. In the graduation ceremony at SNU, we give a presidential award to the graduate with the best grade. I am thinking about adding another award to give to a student who challenged themselves through a project that no one did while they were studying at SNU.

You said that you will create a residential college at SNU’s Gwanak District Campus to nurture creative students who challenge themselves. What do you wish to achieve?

Before students enter university, most haven’t experienced living in a community. In school, even their friends were in competition for school records. We plan to foster leaders who bring their followers to their goal. Through the residential college, there can be more exchanges between professors and students, and students can learn things by living with each other.

SNU has become independent, but it has not yet achieved its expected autonomy. The Ministry of Education continues to meddle in its matters because the school relies on government subsidies. How do you feel about this?

It is hard to be entirely independent without becoming financially independent. When I was the president of the Institute for Basic Science, I visited the Weizmann Institute of Science in Israel. It is a government-funded research center in the natural and exact sciences. I asked a researcher from the institute how much interference they receive from the government, and they said that they are free to do what they want. They asked me how much the government pays the [Institute for Basic Science] and I told them we get 95 percent of our budget from the government. They said that is the reason why we have no autonomy. The institute’s budget is comprised of government subsidies, donations and royalties, each comprising a third of the budget. They make money like Tsinghua University or Stanford by supporting start-ups, which is what the artificial intelligence (AI) valley SNU plans to build in Gwanak District is going to do.

How do you plan on building this AI valley?

Kim Jung-sik, the CEO of Daeduck Electronics, donated 50 billion won ($43.1 million) before he passed away in February. We plan to use this for the valley. This project isn’t limited to the college of engineering. We will include the college of social sciences and the college of fine arts when we create a committee for this AI valley.

It is said that SNU plans to create a department for semiconductors.

The government asked us for help on fostering manpower in the field of non-memory semiconductors, as it is becoming an important industry. At first, we talked about creating a department like Sungkyunkwan University, but it didn’t seem to be in line with SNU’s identity. SNU claims that it is a university that focuses on research, so we thought of creating a graduate school for this purpose and foster manpower through research [on the subject].

Professors are complaining about the restrictions that SNU puts on them. They also complain that private universities will produce a Nobel Prize winner before they do.

When I was the dean of SNU’s college of natural sciences, we were being evaluated by foreign professors. They said that we were doing a better job than they had expected, but also mentioned that professors were taking too many responsibilities compared to the number of faculty members. The physics department at the University of California at Berkeley has over 100 professors, so they are able to do [research on a broad number of subjects]. We need to choose what to focus on, and if SNU doesn’t [carry out research on a particular subject], in reality, it will be hard for that subject to survive in Korea’s academic realm.

Are you planning to improve conditions for research?

The SNU 10-10 Project seeks to solve this problem. The QS World University Rankings has about 50 subjects that it evaluates, such as physics and chemistry. The SNU 10-10 Project plans to put SNU in the top 10 universities in the world on those subjects. This means that we are choosing to select and focus on those subjects. SNU doesn’t have a particular subject or professional in any field that can be boasted of as the best in South Korea. We need [someone or something like that in order] to become a leading university in the world.