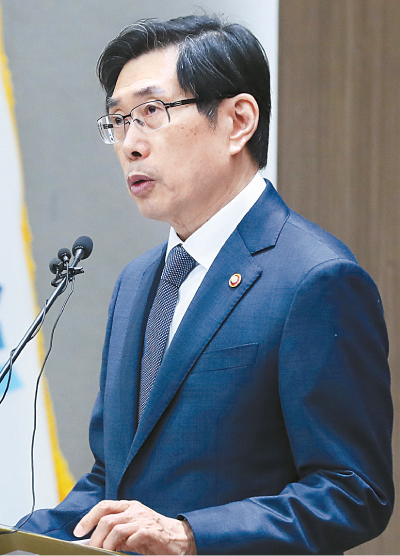 Justice Minister Park Sang-ki on Friday defended the Moon Jae-in administration’s attempt to alter the investigative and indictment powers of prosecutors in the face of mounting complaints about the plan from prosecutors.

“The times have changed, and the people’s perception and awareness have also changed,” Park said. “Not only the prosecutors’ customary practices in investigations, but also their powers must be realigned to satisfy the principle of checks and balances.”

Park said the current system, in which prosecutors are involved in investigations, must be changed.

Park told prosecutors at the ceremonies that they will maintain control over the criminal justice system, dismissing worries that their powers will be greatly weakened after a series of reform measures are implemented.

A package of bills designed to curb prosecutors’ authority by introducing a new investigation agency for senior public servants and redistributing investigative powers between the prosecution and police was fast-tracked by the National Assembly earlier this week. The prosecution is resisting the changes, while the police support them.

“The prosecution still has exclusive rights to apply for warrants and make indictments,” Park said. “Within a larger framework, it has control over the criminal justice system. I believe the National Assembly will have serious discussions in the future to address specific problems and concerns.”

Park expressed concerns about the growing confrontation between the prosecution and police. “The prosecution and police both need to approach the issue from the perspective of the people,” Park said. “If they want to avoid the public criticism of being selfish, they must humbly and seriously prepare for the changes based on reality and reasonable grounds.”

The justice minister’s message was an obvious response to prosecutors’ growing protests. Prosecutor General Moon Moo-il publicly opposed the reform plans in a statement issued Wednesday. Moon said the fast-tracked bills were against the “principle of democracy that promotes checks and balances.”

He also said the police will be given primary investigative rights without supervision and the authority to conduct domestic intelligence operations. Moon said such exclusive rights are too powerful, and did not agree with the changes.

The police refuted those arguments Thursday. The National Police Agency issued a press release that said the reform plan includes a mechanism in which the prosecutors will supervise the police, challenging Moon’s argument that the police will be given exclusive powers of investigation.

The justice minister’s latest remark indicated that he was siding with the police. The ruling party also criticized the top prosecutor for challenging the reform initiative.

“The prosecution is one of the government organs, and I cannot understand how [the top prosecutor] could criticize an agreement of political parties as an infringement on democracy,” Rep. Hong Young-pyo, floor leader of the Democratic Party, said Friday.

It remains to be seen if Prosecutor General Moon will resign in protest. He is scheduled to return to Korea today from an overseas business trip he is cutting short. His term will expire in July.

Meanwhile, the Supreme Prosecutors’ Office said it will submit to the National Assembly its official stance on one of the contentious bills. The statement will specify the prosecution’s position about the bill to create a new investigative agency for senior public servants, and it is expected to be submitted Friday.